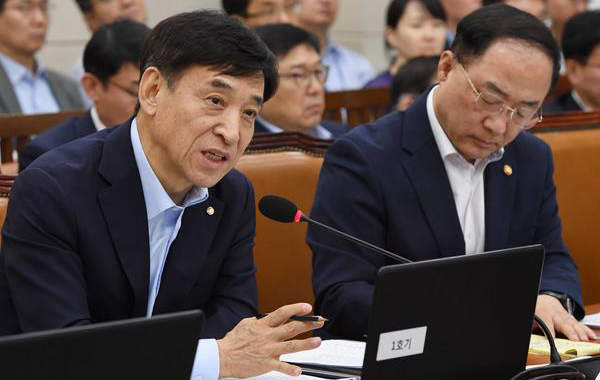 South Korea’s central bank chief shot down the scenario of a looming recession in the United States from the recent debt market movement, perceiving the U.S. economy to still be on “solid” footing.

“The background and causes behind the current yield inversions and those in the past are different,” Lee Ju-yeol, governor of Bank of Korea (BOK), said in a financial policy briefing before the National Assembly on Thursday.

He said past inversions were caused by the U.S. Federal Reserve’s policy rate hikes as part of a monetary tightening drive, which ended up raising short-term rates while lowering longer-term yields.

But the Fed has now taken an accommodative stance, he noted.

“The U.S. economy is not yet in a state to worry about recession as it is still pretty solid,” he said. “We can’t completely rule out its possibility but we also can’t conclude that an inverted curve would inevitably lead to a recession.”

He said economic institutions have put the risk of a recession occurring at around 30 percent.

An inversion in the yield curve has often been considered a strong harbinger of recession. Data shows that the curve inverted about 14 months before each of the past nine recessions in the U.S. economy.

Despite a record economic expansion and very low unemployment, the U.S. economy has been battling fears of a possible slowdown. Last month, the Fed trimmed rates by a quarter percentage point – its first cut since 2008 – citing risks from sluggish growth overseas and soft inflation.

U.S. gross domestic product (GDP) slowed to 2.1 percent in the second quarter, down from the first quarter’s 3.1 percent and the weakest increase since President Donald Trump took office in January 2017.

A slowing U.S. economy would put a further strain on Korea, which is grappling with its own trade tensions and lackluster growth at home.

Asia’s fourth-largest economy expanded 2.1 percent in the April-June period, jumping back from the previous quarter’s surprise contraction on the back of heavy government spending.

Last month, the BOK delivered its first rate cut in three years and further slashed its 2019 growth forecast to a decade low of 2.2 percent from the previous 2.5 percent.

Korea’s economy, battered by the trade war between the world’s two largest economies, took a further hit when Japan in July curbed exports of materials critical to Korea’s chip sector and later stripped the country of its fast-track export status over a decades-old dispute dating back to Japan’s colonial past.

Lee said the bank’s 2.2-percent growth estimate for this year had not factored in the fallout from Japan’s trade restrictions. But he added that while conditions have deteriorated, they are “not enough to warrant a change in the forecast data.”

Still, he cautioned that the growth target would not be easy to reach “if the situation becomes even more severe and exports and facility investment sink further.”

As for hints on the monetary policy direction, he reiterated that “(a rate cut) would definitely be considered if macroeconomic conditions worsen.” The next rate-setting meeting is scheduled for August 30.