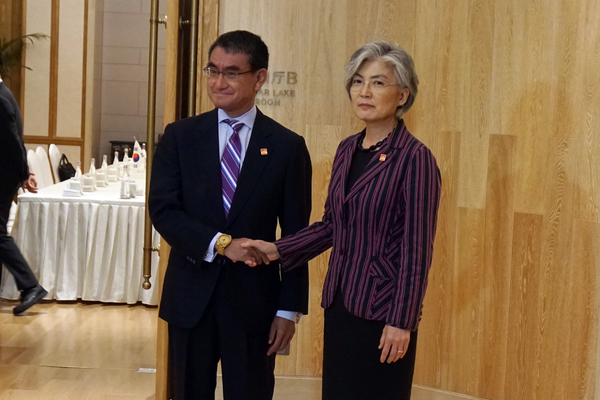 South Korea and Japan has failed to reach an agreement in their latest foreign ministers’ meeting over whether to extend a bilateral military intelligence sharing agreement that could expire on August 24.

Korean Minister of Foreign Affairs Kang Kyung-wha and her Japanese counterpart Taro Kono on Wednesday held talks at a hotel near Beijing, China, on the sidelines of a trilateral meeting of Korea, China and Japan, and discussed various issues including the renewal of General Security of Military Information Agreement (GSOMIA) as a top agenda.

But the meeting that had lasted only about 30 minutes ended without a breakthrough.

According to an unnamed official from the foreign affairs ministry, Japan raised the GSOMIA issue first, but Minister Kang responded only that Seoul “is reviewing” whether to extend the pact. Kono told reporters later that he reassured Kang that it is important to maintain the military information agreement.

After the meeting, Kang walked away without elaborating about their meeting to reporters, just saying “there is nothing more to say” on the subject related to the extension of the defense information pact between Korea, the U.S., and Japan.

South Korea signed a GSOMIA with Japan in November 2016 to counter nuclear and missile threats from North Korea. The deal is automatically renewed every year unless either party gives a 90 days’ notice to terminate it. The agreement is set for renewal on August 24 if none of the parties decides to walk away from it.

But since Korea-Japan relations have worsened after Tokyo tightened its export control on three high-tech materials essential for producing displays and chips early July and removed Korea from its whitelist of favored trade countries a month later despite strong opposition from Seoul, the Korean government has been warning about the possibility of terminating the military intelligence pact unless Tokyo withdraws its exclusive trade curbs on Korea.

Seoul believed Tokyo’s tighter control over exports to Korea is a retaliatory action against Korean court rulings demanding Japanese companies compensate wartime victims of forced labor. Japan has been strongly condeming the rulings saying that the issue was settle by a 1965 bilateral accord that normalized the bilateral ties.

In a tit-for-tat action, Korea also decided to remove Japan from its whitelist of trusted trade partners last week and stepped up countermeasures by hinting at ending the security information sharing pact.

With only two days left before to decide the fate of the deal, the Blue House has not made a final decision yet, according to sources. Kim Sang-jo, presidential chief of staff for policy, said on Wednesday that the Korean government will debate until the last minute to decide whether to keep the military information sharing pact with Japan.

Sources noted that it is highly likely that Korea will decide to extend the pact in “hybrid-form,” as suggested by the ruling party. A hybrid-form of the pact would not abrogate the agreement but simply suspend sharing of information. This would allow Korea to lower security partnership level to an extent that does not dent the Korea-U.S.-Japan alliance.

Korea Defense Minister Jeong Kyeong-doo also said that the government is reviewing the matter “carefully and with depth.” His remarks were made before lawmakers of the National Defense Committee on Wednesday. Jeong added that the military intelligence agreement is of strategic importance to the security of Seoul, Washington, and Tokyo, and the government will take into various aspects because the pact plays an important role in maintaining security on the Korean Peninsula.

During the meeting, Kang also expressed deep dissatisfaction with Japan’s tighter trade control and call on Tokyo to undo them, but Kono reiterated that Korea was the one that violated an international treaty so that Seoul must “take appropriate action” first, according to officials in the meeting.

By Ahn Jeong-hoon and Lee Eun-joo