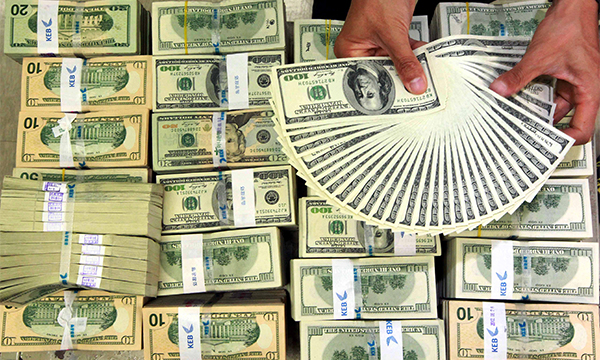 According to data released by the Bank of Korea, the country’s short-term external debt ratio against foreign exchange assets stood at 34.7 percent as of end of June, up 2.8 percentage points from three months ago.

The government said the ratio of Korea’s short-term external debt increased slightly in the second quarter but its foreign debt soundness is still at safe level.

Korean authorities are sensitive to short-term debt ratio after suffering the liquidity crisis in late 1990s.

The government brushed aside any overshot worries over short-term debt increase at a time some talk of a crisis looming for the economy.

In a separate report released on Wednesday, the Ministry of Economy and Finance said despite the small increase, Korea’s short-term ratio was kept under 30 percent of FX reserves and significantly low than other emerging nations.”

According to the ministry, Korea’s short-term external debt ratio stood at 79.3 percent and its share in total external assets 52.1 percent at the end of September in 2008 just before the outbreak of the global financial crisis.

The short-term external debt ratio of Argentina was 100.1 percent at the end of December, last year, and Turkey, 123.8 percent. The figure for China was similar to Korea at 36.4 percent. 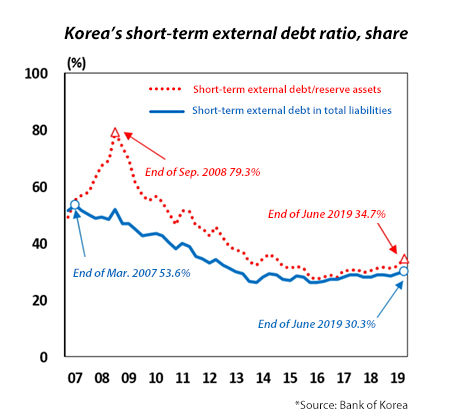 이미지 확대
Korea’s net international investment position – which is foreign assets minus liabilities – reached its highest level at $462.3 billion as of end of June, up $26 billion from the end of March. The difference between external financial assets and liabilities has been on a rise since it turned positive in 2014.

External debt – which excludes investment in equities and financial derivatives in liabilities stood at $462.1 as of end of June, up $21.5 billion from three months ago. Short-term assets reached $140 billion, up $10.6 billion during the same period while long-term assets $322 billion, up $10.9 billion.

The economy and finance ministry said that Korea’s external assets increased in the second quarter as foreigners expanded investment in government bonds and stabilization bonds and local branches of foreign banks increased borrowing. It noted the figure has low relevance to the country’s external soundness such as its payment capability.