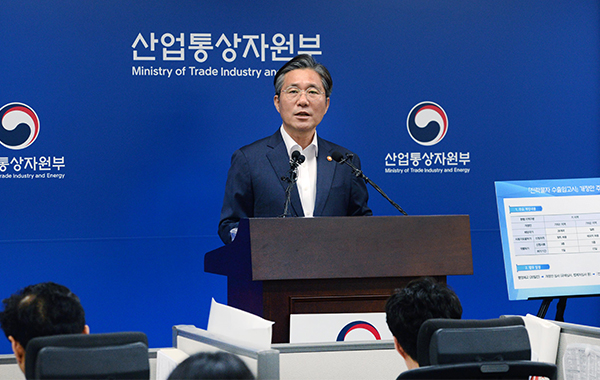 Sung Yun-mo, South Korea’s minister of trade, industry and energy, announces to remove Japan from its own whitelist of trusted traded partners on Monday in a briefing at the government complex in Sejong. [Photo by the Ministry of Trade, Industry and Energy]

The South Korean government on Monday announced it was removing Japan from its whitelist of trusted trade partners in a tit-for-tat action against Tokyo’s earlier move.

In a briefing held at the government complex in Sejong on Monday, Sung Yun-mo, Korean minister of trade, industry and energy, said that the government will divide the top-tier list of countries receiving preferential treatment for exports into two groups – the first involving existing trusted export partners and the second group Japan that will be removed from the whitelist.

“The newly created second group will include countries participating in the four international export agreements but operating export control system that violates the principle of international norms,” Sung said. “Japan will be listed in the second group in the revised notification plan.”

With the latest measure to remove Japan off the whitelist of trusted export partners, Korea will have 28 countries on the list of countries subject to preferential export procedures, which are all members of four multilateral export control regimes – Wassenaar Arrangement (WA), Nuclear Suppliers Group (NSG), Australia Group (AG), and Missile Technology Control Regime (MTCR).

이미지 확대
The Korean government has decided to exempt countries listed in the second group of the top-tier category from submitting some application documents for case-by-case approval and receiving strategic material brokerage permits.

The government will grant special “bulk approval” in only exceptional cases to countries in the second of the top-tier category, which otherwise is given to all countries in the first group under compliance program.

The changes are expected to go into effect in September after 20 days of gathering public opinion and holding regulatory and legislative reviews.

The Korean government’s move comes after Japan removed its neighboring country from its trade whitelist earlier this month after it tightened exports of three key high-tech materials essential for the production of semiconductors and displays last month. Japan’s move is seen as retaliatory actions against Korea after Seoul court rulings ordering Japanese companies to compensate forced wartime workers during World War II.