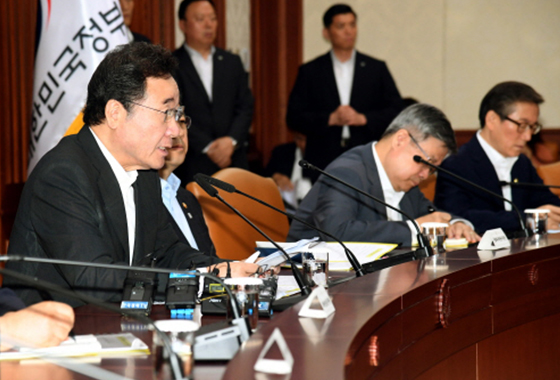 Korean Prime Minister Lee Nak-yon Thursday confirmed that Tokyo approved a Japanese vendor of photoresist, one of the three products subject to the export controls since July 4, to ship out the product to Korea after finding no risk of military use.

Since July 4, Tokyo exempted three materials going into semiconductors and display panel production from fast and simple clearance when heading for Korea, which until then was on a whitelist status bestowed on “trusted” trade partners to exempt complicated procedures on exports of items falling under strategic and sensitive category with the risk of weaponry applications.

Under the new rule, exporters of the three chemicals had to gain separate permission for each shipment, a process that takes up to 90 days. No shipments had been granted until the latest case.

Seoul had strongly protested the move as unfair discrimination and a spiteful response to Korean Supreme Court rulings on wartime forced labor as the restrictions targeted Korea’s core components industry responsible for a quarter of the country’s exports. Tokyo has denied such intentions and maintained the move was on security grounds.

Industry observers had projected the first approval to come around early October, expecting Japan to drag out its maximum three-month period. But the decision appears to have been hastened amid fears of disruption to the global supply chain.

The move is also seen as Tokyo’s attempt to avoid international criticism after doubling down its pressure on Seoul last week by dropping Korea from its list of favored trade partners.

While officially removing Korea from the whitelist status on Friday, Tokyo did not name specific items apart from the three requiring case-by-case approval.

이미지 확대
The photoresists are necessary for advanced technology called extreme ultraviolet (EUV) lithography. Korea depends more than 90 percent of its photoresist on Japanese supplies. It is a key material in the foundry business, an area in which Samsung Electronics has set out to claim world leadership in efforts to diversify beyond memory chips.

Meanwhile, there were reports that a Japanese exporter also gained approval to ship hydrogen fluoride, an etching gas necessary for cleaning chips, to Samsung’s chip facility in Xian, China.

By Jung Wook and Kim Hyo-jin