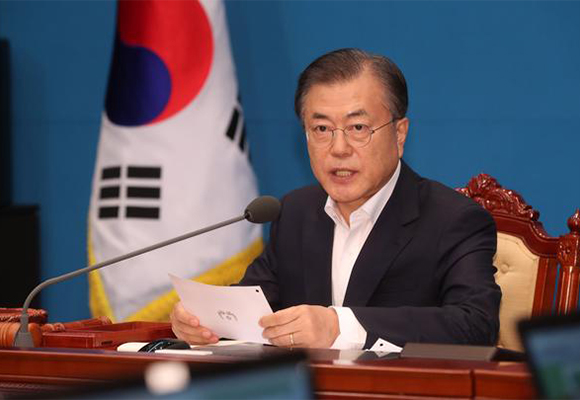 Japan’s cabinet on Friday passed a bill to remove South Korea’s fast-track export status, a measure that will require Japanese exporters to seek case-by-case approvals of more than 1,100 items shipped to South Korea.

South Korea has warned the measure, which goes into effect on Aug. 28, would deepen the rift between the two countries and chill bilateral relations.

Tokyo’s decision comes a month after it tightened curbs on exports to Korea of three high-tech materials needed to make semiconductors and display panels, dealing a direct blow to Korea’s key industries.

Japan said it took the measure on security grounds, but Korea condemned the move as retaliation for Korean court rulings that ordered Japanese companies to compensate wartime forced laborers during Japan’s occupation of the Korean Peninsula from 1910 to 1945. Japan argued that the claims were settled in a 1965 treaty that normalized ties between the two nations.

"As it has become clear that the responsibility for the worsening situation lies with Japan, I clearly warn that the Japanese government will be fully responsible for what happens going forward," Moon said during a nationally televised emergency cabinet meeting.

이미지 확대
“Japan’s decision undermines our long-term economic cooperation and security ties and poses a deep threat to bilateral relations. Its selfish act could disrupt the global supply chain and wreck havoc on the global economy, and is likely to draw condemnation from the international community” he added.

Korea has warned it may consider canceling an intelligence sharing accord with Japan, known as the General Security of Military Information Agreement (GSOMIA), if Japan removes Korea from its whitelist. The bilateral accord, which is automatically renewed every August, is largely aimed at countering North Korea’s nuclear and missile threats.