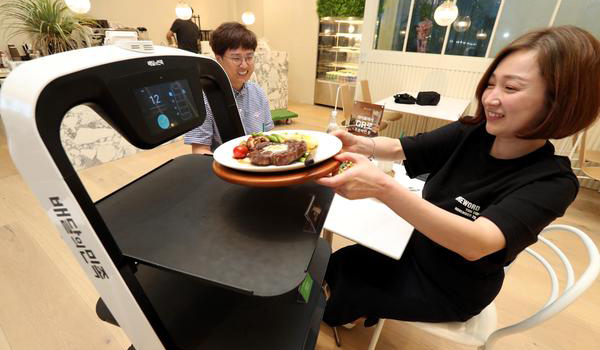 A self-navigating robot delivers food to customers at Merry-Go Kitchen in Seoul, a robot-serving restaurant run by Woowa Brothers. [photo by Kim Ho-young]

The food tech startup has opened the restaurant located in Songpa District in southern Seoul that incorporates the company’s long-established, future technologies including a self-navigating robot and smart ordering technology.

Customers can order food via Baemin Smart Order system at Baedal Minjok app that provides various photos and videos about the menus by scanning a QR code on each table. When the food is ready by human chefs, a self-navigating robot delivers food and drink orders to customers by moving on fixed rails. The robot is able to avoid any obstacles that get in the way and bring foods to up to four tables at once. All a staff has to do is just enter the table number on the robot.

The new service offered in the restaurant is called ‘untact’ service, one of the fast-emerging customer trends in Korea. ‘Untact’ is a combination of the prefix ‘un’ meaning ‘no’ with the word ‘contact’, meaning providing services without any face-to-face contact between the seller and buyer.

By Kim Gi-jung and Choi Mira