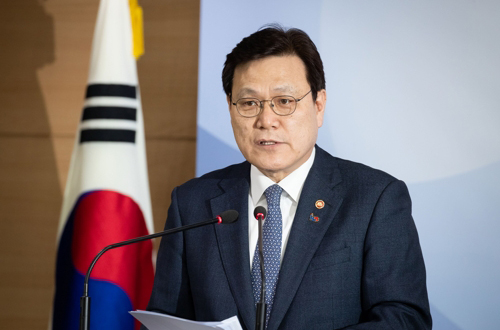 이미지 확대
The chairman of South Korea’s Financial Services Commission (FSC) has offered to step down ahead of the reshuffle the Blue House is readying later this month.

Choi Jong-ku, the chief of the country’s top financial policymaking body, said Thursday he gave his seat up a year before his three-year term expires to “ease the burden” on the presidential reshuffle expected largely to replace the cabinet members who had started with President Moon Jae-in after he took office in May 2017.

Insiders say Choi hinted at his departure by choosing not to attend the launching ceremony of the special judicial police of the regulatory Financial Supervisory Service (FSS) on Thursday. The two financial organizations had been locked in a power struggle over the investigation authority, budget and nomination rights of the new unit, which would be given the investigative power to crack down unfair practices in the financial sector.

So far, financial regulators in Korea have had to refer antitrust cases to police or prosecutors as they lacked the power to conduct independent probes.

In the end, the FSS won the fight, with the special police force shaped largely to its liking. In a show of disapproval, Choi issued an official statement last week saying there was “room for much improvement” in the new police squad.

Choi is said to have often been in conflict with the FSS chief Yoon Suk-heon over various issues, notably the approval of internet-only banks and Samsung BioLogics’ accounting scandal.

By Kim Dong-eun and Kim Hyo-jin