Asiana Airlines tender to start July 22, with aim to complete sale by year-end 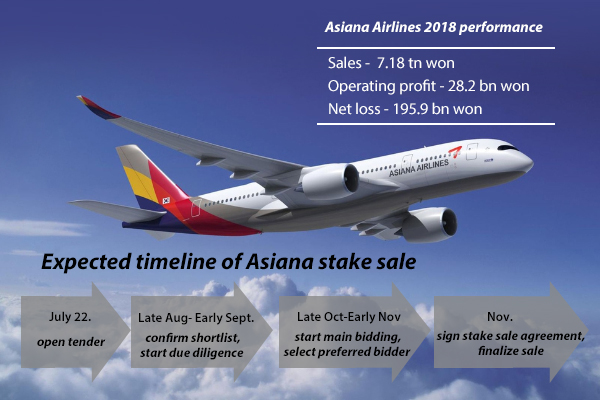 이미지 확대
The tender for Asiana Airlines Inc., Korea’s No. 2 full-service carrier, will be posted next week with its parent Kumho Group aiming to complete the stake sale within the year even if the airliner has to be broken up from its budget affiliates to facilitate the deal, according to sources.

State-run Korea Development Bank and other creditors are ready to wrap up their due diligence of Asiana Airlines and invite bids on July 22, sources familiar with the matter said Wednesday.

They have not discovered any serious problems from the due diligence that could delay the sale, the sources said. The creditors are reportedly seeking to complete the deal by November or December at the latest.

Kumho Industrial Co., the parent company of Asiana Airlines, in April offered to put up its entire 33.5 percent stake in the flagship unit in return for emergency loan and debt relief. The carrier has been saddled with 3.4 trillion won ($2.89 billion) in short-term debt, including 1.3 trillion won of loans maturing this year.

The creditors and Kumho Industrial will shortlist potential candidates by late August or early September and allow them to perform their own due diligence. Once the creditors name the preferred bidder, the stake sale is expected to be finalized by November.

The creditors have previously said the deal would include the two budget affiliates, Air Busan and Air Seoul. But insiders say separate sales could also be considered depending on market conditions.

According to the creditors, the cost of acquisition and normalization of operations is expected to be around 1.2 trillion won to 2 trillion won. The price burden has been somewhat eased as creditors have agreed to provide interim loans of 500 billion won.

Aekyung Group, which owns the low-cost carrier Jeju Air, is said to be eyeing Asiana’s budget fleet. SK Group and Hoban Construction are also cited as potential suitors, along with Hanwha Group, GS Group and Lotte Group. No company has yet expressed formal interest in Asiana.