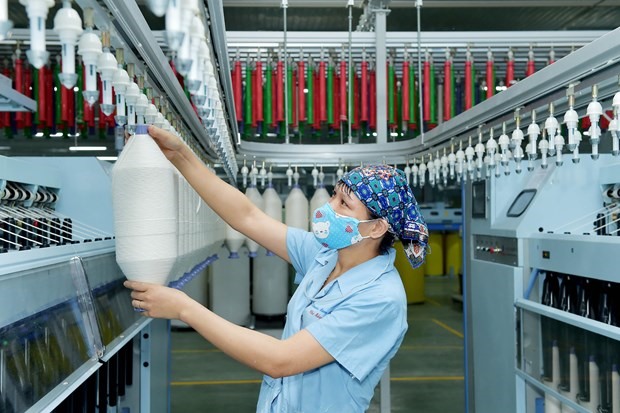 Lopsided development of its various segments and dependence on imports have weakened the textile industry`s competitiveness and creativeness, experts said.

Nguyen Van Tuan, chairman of the Viet Nam Cotton and Spinning Association, told Thoi Bao Kinh Doanh (Business Times) newspaper that while the yarn and apparel segments had grown strongly, others like dyeing were poorly developed, causing a bottleneck.

Besides, garment companies were hugely dependent on imported fabric, he said.

In 2017, for instance, 6.5 billion metres of cloth were imported, or two thirds of the industry`s entire demand.

Viet Nam Customs data shows imports in May were worth US$1.35 billion, taking the total for the year to US$5.43 billion, a 5.8 per cent rise year-on-year.

"Because of dependence on imported fabric, companies have lost their creativity and so cannot add value," Tuan said.

Concurring with the idea, Tran Thi Thu Hien of Chien Thang Garment Company said the main weakness of garment companies was their dependence on imported cloth, mostly from China.

That was also a reason Vietnamese companies were expected to face difficulties after the country joined free trade agreements like the CPTPP since China is not a member of these agreements.

Besides, the huge fabric import was a paradox considering two thirds of the fibre produced in the country, or 750,000 tonnes, were exported every year at increasingly lower prices.

Experts attributed this to the poor development of the dyeing segment.

They said local companies lacked proper awareness of the dyeing process. They also lacked the technologies, human resources and skills required to develop this sector.

Furthermore, there were no industrial zones fully equipped to serve the dyeing industry, they said.

Tuan said developing the fabric and dyeing segments would be the key factor in the growth of the garment and textile industry.

He called for establishing industrial zones specialising in dyeing and cloth production.

Attracting foreign direct investment in the industry was also a key requisite for its development, he said.

Besides, there was a need for training human resources, he added.

Experts said most garment and textile companies had to hire foreign experts in dyeing, which pushes up their production costs.

So investing in the training of human resources was vital to developing the dyeing segment, they added. - VNS