HMM invited onboard The Alliance for 10 years from next year 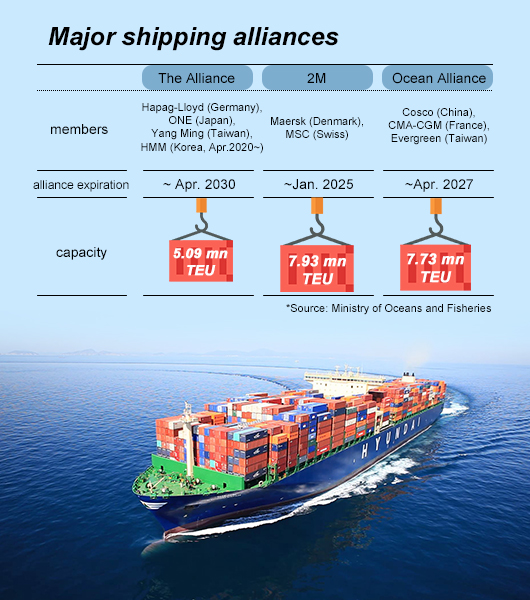 이미지 확대
South Korea’s leading container carrier Hyundai Merchant Marine Co. (HMM) will become an official member of the world’s major vessel-sharing group The Alliance from 2020 to 2030, a face-moving move for the Korean industry after the collapse of the country’s largest maritime name Hanjin Shipping.

The Ministry of Oceans and Fisheries and HMM announced Monday that the Korean shipper will become the fourth member of The Alliance, one of the world’s top three shipping alliances, joining Germany’s Hapag-Lloyd, Japan’s Ocean Network Express (ONE) and Taiwan’s Yang Ming Transport. HMM’s entry will increase the alliance’s shipping capacity from current 4.09 million twenty-foot equivalent unit (TEU) to 5.09 million TEU.

The container carrier will receive 12 vessels with 23,000 TEU in the second quarter of 2020 and eight 15,000 TEU containers in 2021. It plans to operate the ships immediately after delivery to accelerate its management normalization efforts. The Oceans ministry expected that The Alliance’s share of operation would grow to more than 30 percent when HMM deploys the large-sized carriers in the Asian-North European route.

HMM has been a strategic partner of 2M Alliance since April 2017 when its full membership was denied due to its liquidity problems amid industry-wide slump. The company has been in talks with major shipping alliances since the second half of last year as the partnership will be expired in March 2020. It said it picked The Alliance because it made the best offer. Its full membership status will take into effect from April 2020.

By Chun Gyug-woon and Choi Mira