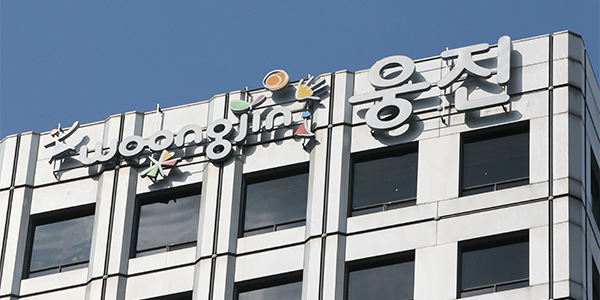 이미지 확대
In a bewilderingly sudden move, South Korea’s mid-tier conglomerate Woongjin Group has decided to sell home appliance rental service unit Woongjin Coway Co. in just a month since it singularized rental business operations under one roof after Coway was brought back to the parent in March.

Woonjin Group said on Thursday that it has decided to re-sell Woongjin Coway after its hard-won reacquisition in six years since it had to divest the first water purifier rental business due to financial troubles. Korea Investment & Securities Co. which arranged the financing for the purchase will also manage the re-sale.

Woongjin Coway has been leading the nation’s home appliance rental service industry since it entered the market for the first time in the country in 1999. But in 2013, its founder Woongjin Group had to sell off the cash cow to local private equity fund MBK Partners due to group-wide liquidity crunch. In March this year, the group retrieved the unit by purchasing a 22.17 percent stake from MBK Partners through a consortium between its education unit Woongjin ThinkBig and consortium partner STIC Investment PEF at 1.68 trillion won ($1.45 billion). 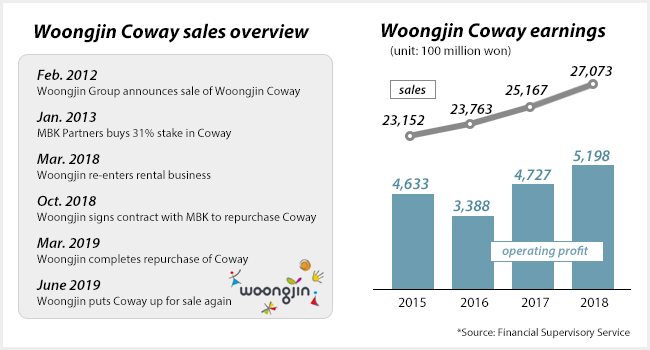 이미지 확대
In March, Woongjin also announced it would additionally buy Coway shares from its second largest shareholder Singapore sovereign wealth fund GIC with a 7.35 percent stake worth up to 300 billion won to enhance its grip on the water and air purifier maker.

But the group woefully has been forced to yield the rental unit yet again as the financial problems of the group’s solar cell manufacturer Woongjin Energy that had recently been put under court receivership would spill over to the entire group. Due to the concerns, a local credit rating agency recently downgraded credit rating of the group’s holding entity Woongjin from BBB+ to BBB-.

Woongjin Coway is expected to draw many competitive contenders from home and abroad thanks to its sound performance. It generated record-high sales of 2.7 trillion won and 520 billion won in operating profit last year. Market sources speculate local conglomerates such as LG, Lotte and CJ eyeing to expand the rental business would likely to participate in the buyout race.