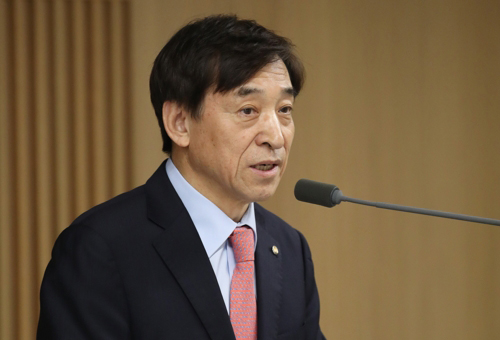 Korean bonds rallied Wednesday as they cheered the central bank chief’s most dovish comment to date responding to the heated market pressures for a rate cut.

“There is a need to take timely (monetary) action in the face of changes in economic conditions,” Lee Ju-yeol, governor of the Bank of Korea (BOK), told bankers at an event marking the 69th anniversary of the central bank.

After chairing the May 31 meeting that kept the benchmark rate steady, Lee said the “time was not yet ripe” for a rate cut, a shift in language compared with the outright denial of an easing action in the previous month.

The tone turned even more dovish with the indication of “timely” action.

The market interpreted his comments as signal for a possible rate move as bond yields touched new annual lows. The three-year government bond yield closed Wednesday 7.3 basis points lower from the Tuesday close at 1.469 percent, while the yields on the longer curve saw steeper falls below the overnight policy rate of 1.75 percent. The five-year and 10-year bond yield fell 7.8 basis points and 8 basis points to 1.510 percent and 1.600 percent, respectively. The flattening deepened with even the 50-year paper hovering sharply below the benchmark rate at 1.647 percent. Prices of the three-year bond have gained 19 percent and the 10-year bond 22 percent from their annual lows on Jan. 30. (Bond price and yield move in the opposite direction.)

Lee projected bigger-than-expected damage on the economy from the U.S.-China trade war and a lengthier downturn of the semiconductor industry, Korea’s mainstay that makes up more than one-fifth of its total exports.

이미지 확대
His outlook was markedly grimmer from April when he projected an upturn in the chip industry in the latter half following a general pickup in demand from major economies. His so-far upbeat forecast had been behind the bank’s decision to stay pat on rates in April and May.

Lee said the worsening external environment has “raised the uncertainty of Korea’s growth trajectory” and that given the country’s over-reliance on a few sectors, it is particularly vulnerable to market risks.

His comments suggest the BOK may further revise down its economic growth rate for this year. In April, the bank cut its 2019 economic growth forecast to 2.5 percent from 2.6 percent. The revised projections would be announced at the next rate-setting meeting on July 18.

Earlier this month, the bank released revised data showing that Korea’s economy shrank more than initially estimated in the first quarter, contracting 0.4 percent from the previous three months, while inflation slowed to a near 20-year low in May.

The BOK’s shift in tone comes a few days after Yoon Jong-won, senior presidential secretary for economic affairs, told reporters in a briefing that “external uncertainty has grown greater than expected” and that “more aggressive policy actions are necessary” given the increased downside economic risks and the slowing global economy.

Analysts expect the rate cut to take place in the fourth quarter. The meetings for the final quarter are scheduled for October 17 and November 29.

By Lee Yu-sup and Kim Hyo-jin