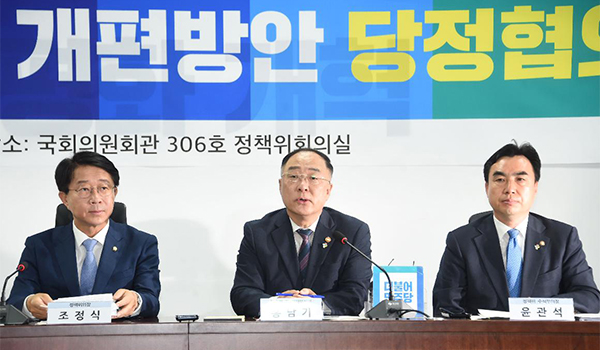 Hong Nam-ki, minister of economy and finance, center, makes an opening statement on simplifying inheritance tax deduction law for family-run SMEs in a meeting with ruling Democratic Party at the National Assembly in Yeouido, Seoul, on Tuesday. [Photo provided by the Ministry of Economy and Finance]

The government – led by Ministry of Economy and Finance – held a meeting with the ruling Democratic Party on Tuesday and discussed measures to allow more flexibility in granting inheritance tax deductions for small family businesses.

Changes will be reflected in the government’s 2019 amended tax bill that will be submitted to the National Assembly for approval in early September before enforcement next year.

Under the change, SMEs should sustain the family business, assets, and employment unchanged for seven years, instead of current 10 years, to qualify for inheritance tax break starting next year.

The break remains restricted to companies with annual sales of less than 300 billion won ($253 million) with a maximum deduction of 50 billion won.

Once the bill is tabled, more companies could benefit as lawmakers have been demanding sales threshold be relaxed up to more than 1 trillion won. Some lawmakers also argue for benefits to family-run SMEs when business is transferred from founders to their children.

“We expect the changes could help boost jobs and investment for family-run businesses in the SME sector,” said Hong Nam-ki, minister of economy and finance in the government-ruling party meeting.

Korea is known to have one of the highest inheritance taxes in the world, leading many to give up family business. SMEs also come under strict inheritance criteria.

이미지 확대
To qualify, SMEs with less than 300 billion won in annual sales that receive up to 50 billion won in inheritance tax deduction must keep all employees – or even more for mid-size firms – for up to 10 years. They also cannot dispose 20 percent or more of family assets and change business category. The government proposes to keep the requirements intact except to shorten the period by three years. Violation leads to full inheritance tax plus penalty interest.

The government benchmarked the lock-up period of seven years in Germany and five years in Japan.

For example, family-run SMEs will still be able to receive inheritance tax deduction benefits even if they change business category from “flour milling industry” to “bread-making” or from “alcohol drink manufacturing” to “non-alcohol drink manufacturing.” Companies engaged in “food retail” will also be able to change business classification to “general merchandising.”