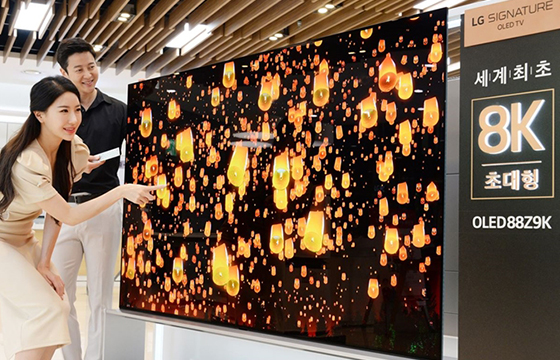 South Korea’s LG Electronics Inc. accelerates its campaign for TV migration to OLED by launching the display in 8K resolution.

The company said on Monday it will take pre-orders for the 88-inch 8K LG Signature OLED TV, which would be the first of its kind in the world, throughout June. The TV will hit the Korean market first in July and then North America and Europe in the July-September period. The company also plans to release other premium lineups including 75-inch 8K HD TV in the second half.

Customers of LG’s 8K OLED TV can experience the premium resolution offering the real life-like detail and place an order at LG Best Shop stores and other shops in major department stores.

The TV priced at 50 million won ($42,322.67) features LG’s second-generation Alpha 9 8K processor that uses deep learning algorithm to help upscale images to a higher resolution. As there actually is not much 8K content available to watch for now, the processor is to optimize the resolution and sound of the content displayed.

On top of that, the TV is fitted with Google Assistant supported by Korean and an 80W base speaker, according to the company.