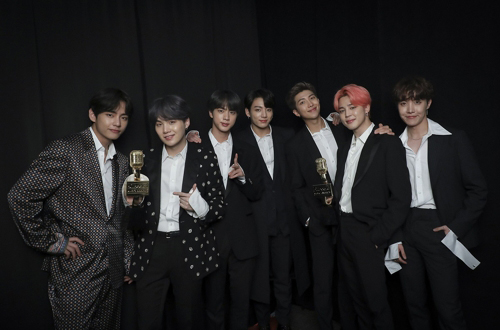 The seven-member boyband won the Top Duo/Group award, beating out superstars such as Imagine Dragons, Maroon 5, Panic! At The Disco and Dan + Shay. It was the first K-pop artist to win in the category, an honor that is viewed as accreditation for its musical talent and not just its massive social media following.

The group also claimed the Top Social Artist award for the third year in a row. Other nominees in the category were fellow Korean boy groups GOT7 and EXO, along with Ariana Grande and Louis Tomlinson.

Jungkook, Jimin, Suga, Jin, V, J-hope and RM all took to the stage to receive the award, with the leader RM thanking the fans in his acceptance speech.

“Thank you ARMY. Still can’t believe we’re here on this stage with so many great artists, oh my god," RM started. "This was only possible because of the little things we share together. The BTS and ARMY power, right? We’re still the same boys from six years ago. We still have the same dreams, we still have the same thoughts. Let’s keep dreaming the best dreams together. Thank you, I love you all.”

The members also teamed up with Halsey for their first live performance together of their hit collaboration “Boy With Luv.” The title appears on the group’s latest EP, “Map of the Soul: Persona,” which debuted at No. 1 on the Billboard 200 last month. This is its third album to top the Billboard charts in less than year, a feat last achieved by the Beatles.