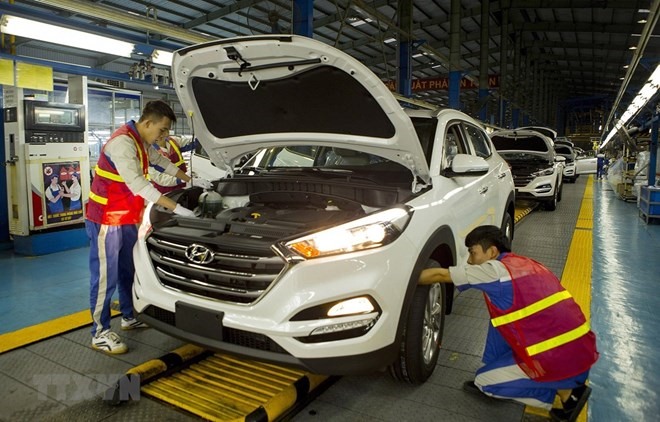 An automobile on the assembly line at a Hyundai Thanh Cong factory. - VNA/VNS Photo

Automobile sales by firms in the Vietnam Automobile Manufacturer Association (VAMA) in February declined 61 per cent from the previous month, the sharpest month-on-month fall ever recorded.

On Wednesday, the association reported its members sold just 13,143 vehicles in February.

Similar downturns were seen both in domestically assembled and imported automobiles at 59 per cent and 63 per cent, respectively.

Insiders said the drop in the market was due to the long Lunar New Year (Tet) holiday, falling in early February, which interrupted sales. Meanwhile, customers tended to purchase automobiles before Tet, thus reducing sales after the holiday.

However, the sales figures do not reflect the country`s entire automobile market, as they did not include sales of other manufacturers that are not VAMA members.

Compared to the same time last year, VAMA sales in February rose slightly by 6 per cent.

Huyndai was the most successful firm in February, pushing Toyota to second place with 2,300 vehicles sold, followed by Mazda with 1,701 vehicles, Honda with 1,625 and Ford with 1,598.

The Honda CR-V was the best-selling car model in February with 961 sold, followed by the Hyundai Accent and Grand i10 with 933 and 849, respectively. The Mazda 3 came fourth with 701 vehicles sold.

Notably, the Toyota Vios, the best seller in many previous months, fell to the fifth most popular make with only 636 vehicles sold.