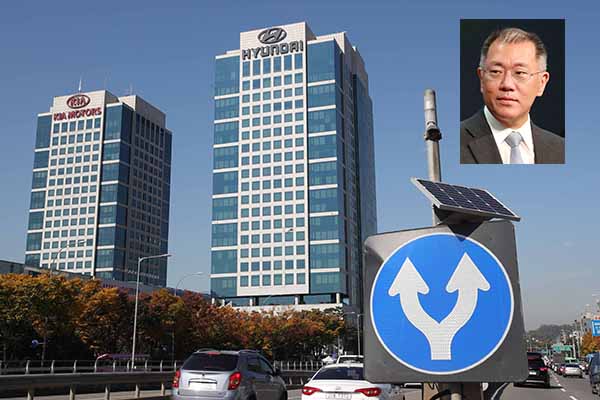 이미지 확대
Chung Eui-sun, executive vice chair of South Korean auto giant Hyundai Motor Group, will take command of Kia Motors Corp. as an inside director in another step to take the helm of the family-run conglomerate.

Kia Motors in its regulatory filing on Wednesday disclosed its plans to change Chung’s status on the company board from the current non-standing director to inside director at the next shareholders’ meeting scheduled for Mar. 15.

Kia Motors, which together with its larger sibling Hyundai Motor Co. is the world’s fifth-biggest automaker, has proposed renewing the board term of Chief Executive Park Han-woo and newly appointing Chief Financial Officer Joo Woo-jung as a director.

Chung, the only son of Hyundai Group Chairman Chung Mong-koo, has been making swift moves to take over the auto empire run by his father over the past two decades.

In September 2018, he was promoted to executive vice chairman of the auto group, tasked with overseeing its entire operations and aiding and reporting to his 80-year-old father. The group’s sweeping year-end executive reshuffle also signaled a generational shift, with the old guard making room for younger, foreign-trained recruits.

Chung had served as a non-standing director of Kia Motors since 2010, attending board meetings without engaging in day-to-day operations. But since his promotion to vice chair last year, he has sought to take on more responsibility over the sprawling group of 56 companies.

With his renewed seat at Kia Motors, Chung would now hold an inside director position at the group’s four key units, including Hyundai Motor, Hyundai Steel Co., and the auto parts unit Hyundai Mobis Co.

By Lee Jae-cheol and Kim Hyo-jin