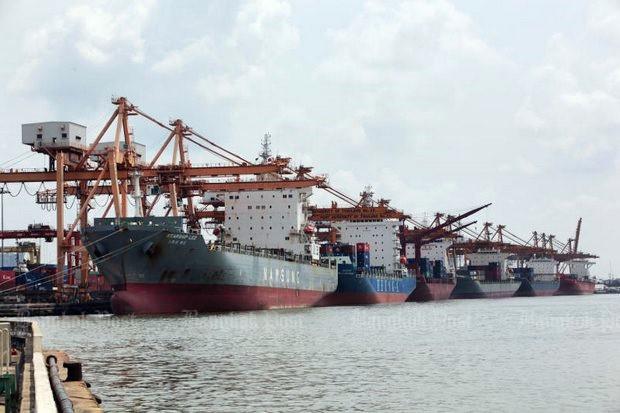 TMB Analytics expects shipments this year will grow less than previously projected because of trade tariffs. (Photo by Tawatchai Kemgumnerd)

Next year Thailand`s economic growth and exports are anticipated to be below this year`s rates, mainly because of heightening external risks, says TMB Analytics, a research unit of TMB Bank.

The think tank predicts GDP to expand by 3.8% next year, with prospects dampened by indirect impacts of the Sino-US trade disputes, said Naris Sathapholdeja, head of TMB Analytics.

Exports to China represent 10% of Thailand`s total exports, according to TMB Analytics.

Export growth will come in at 4.3% next year, said Mr Naris.

The forecast is based on China`s economic slowdown being poised to shave Thai exports growth by 0.4%, while the US`s Generalised System of Preferences (GSP) measure on Thailand and the Sino-US trade are projected to cause Thai exports to shrink by a combined 0.2%.

TMB Analytics also cut Thailand`s GDP growth rate for this year to 4% from 4.5% based on adverse impacts from the trade disputes.

This year`s exports are anticipated to expand by 7.4%, down from 8.6% projected previously, said Mr Naris.

Exports rose 8.19% between January and October from a year earlier, with imports expanding by 14.8%, according to the Commerce Ministry.

The private sector recently warned export growth would decline next year, mainly on the continuing trade war between China and the US, with the Thai National Shippers` Council expecting exports to expand by around 5%.

Consumption is expected to expand by 4.7%, up from the previous forecast of 3.4%.

But domestic consumption is expected to fall to 3.5% next year because of this year`s base effect, he said.

Higher government spending projected at 7.7% next year, up from this year`s estimate of 5.1%, will help sustain both public and private investments growth, especially investment projects in the Eastern Economic Corridor, said Mr Naris.

TMB Analytics maintains the view the Bank of Thailand will begin raising the policy interest rate by 25 basis points next month to uphold policy space against other major central banks.

"For next year, it is too late for a rate hike given the [expected] slowdown. The central bank has been too slow on policy interest rate [normalisation]," he said.

The US central bank`s fed funds rate is expected to be raised to 3% next year, with Thailand`s policy interest rate projected at 2%, said the think tank.

The wider interest gap will result in foreign capital outflows from Thailand`s capital market, he said.

The seven-member Monetary Policy Committee on Nov 14 kept the policy rate unchanged at 1.5%, where it has stood since a 25-basis-point cut in April 2015, but three voted for a quarter-point increase, up from two votes at September`s meeting and one in August and June.