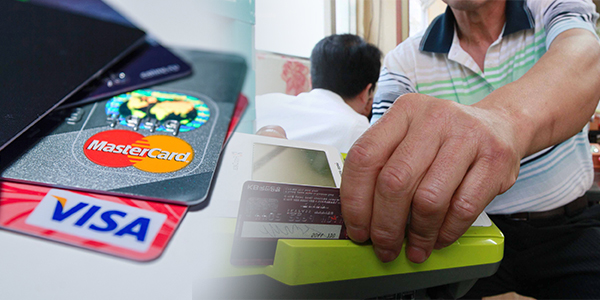 The Financial Services Commission (FSC) on Monday announced that it will expand the scope of small and mid-size businesses benefitting from a cut in service charges from those with annual sales of 500 million won ($442,900) or lower to 3 billion won or lower starting in the end of January, next year.

The FSC expected that the additional relief would help about 244,000 shops with annual sales of between 500 million won and 3 billion won to save from 1.47 million won to 5.05 million won a year in their expenditures for credit card settlements.

Credit card companies are strongly resisting the additional burden, blaming the government of transferring the fallout from wage-led income policy onto the industry. The cut in commission fees would wipe out 800 billion won from annual revenue.

Card companies are already fretting about their job. Earlier this month, Hyundai Card announced plans to cut labor force for the first time since its inception.

A group of labor unions of credit card companies on Monday tried to penetrate into the National Assembly to protest against the move.

“The latest scheme excludes plan to raise commission rates on big businesses, which in the end would bring harm to all interested parties including card companies, small businesses, and consumers,” the group said, threatening a general strike if the policy goes in force.

By Lee Seung-yoon and Lee Eun-joo