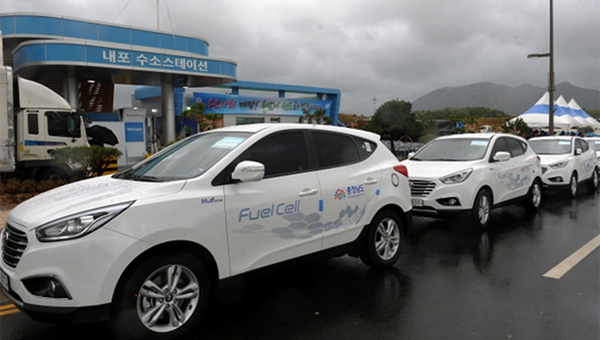 The Korean government will ease some 80 additional regulations to stimulate the development of innovative products and services in newly emerging tech sectors. The deregulation includes allowing the establishment of hydrogen fuel stations in urban commercial areas and a dedicated drone-flying zone close to a cluster of drone developers.

The Office for Government Policy Coordination said that eco-friendly cars and drones were selected as areas that need across-the-board deregulations this year and measures to remove 82 regulations blocking the market release of new products and services were determined during a meeting presided over by Prime Minister Lee Nak-yon on Thursday.

Under the plan, the government decided to allow the use of various types of hydrogen fuel charging stations by easing location-related regulations, the biggest obstacle to market penetration of hydrogen-fueled vehicles. The land and transport ministry will allow hydrogen filling stations to be installed in commercial areas for user convenience.

In addition, the government decided to allow building a hydrogen fuel station in bus depots and near a compressed natural gas (CNG) filling station located in green belt zones.

The industry ministry already introduced a special guidance to allow installing a mobile hydrogen filling station which is less expensive than the existing fixed type.

The government will also set up a dedicated drone-flying zone to allow drone developers to freely test flight products near their workshops. The zone will be first built in the area near Korea Atomic Energy Research Institute in Daejeon, where drone developers are clustered.

By Seok Min-soo and Minu Kim