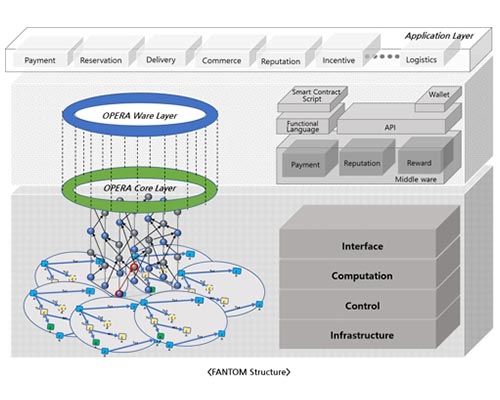 이미지 확대
A consortium consisting of Korean restaurants and delivery service app developers will seek to raise 50 billion won ($47 million) through an initial coin offering (ICO) in Hong Kong in June in what would be the first means of capital raising through cryptocurrency allocation instead of legitimate equity from a Korean originated entity.

The consortium called FANTOM said on Tuesday it is planning to establish a foundation in Hong Kong to attract 50 billion won funds from institutional and individual investors through an ICO. The consortium said its blockchain platform FANTOM aims to handle more than 300,000 blocks per second and support a massive amount of smart transactions. The speed is a lot faster compared with 8 minutes for the formation of a block by Bitcoin and 12 seconds by Ethereum.

An ICO allows a company to raise money by selling its own cryptocurrency. In return, investors would earn the virtual coin at discounted rates or free once the company actually launches the business later. Such a cryptocurrency also can be traded for other tokens in crypto exchanges. The ICO market has lately surged, and messaging app provider Telegram recently raised $850 million in the first round of its ICO in the U.S.

The Food Tech Association, which is joining the Korean consortium, will apply the payment service to its member companies in time with the ICO upon the development of the FANTOM platform. It plans to apply the blockchain technology to food tech transactions valued at about 200 trillion won to reduce the payment fee greatly and track food delivery history for customers.

The association has about 90 food tech members including Baemin, Siksin, YAP, Meatbox and Barogo. Payment will be made through virtual currency FANTOM that will be converted into ACTOR, a token that is accepted as fiat money.

Users can buy a FANTOM coin on the exchange after the upcoming ICO and convert it to ACTOR, or charge their token wallet directly by cash or credit card.