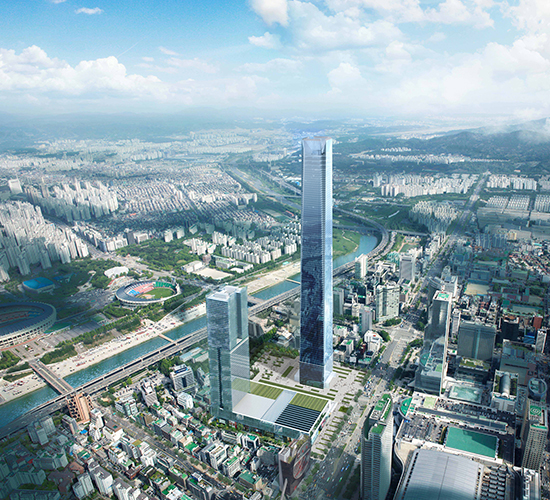 According to Gangnam-gu Office on Wednesday, the world’s fifth largest automotive conglomerate submitted a draft for environmental impact assessment that showed its Global Business Center would be 569 meters tall and have 105 floors in Samsung-dong, southern Seoul. It had previously planned to construct a 553-meter-tall building, but had to revise it to 569 meters due to some systemic issues, the group said. If completed, the building would be taller than the nation’s current highest building Lotte World Tower with 123 floors.

The group aims to complete the construction by 2021. The building complex will stand on a floor space of 926,162 meters to house the group’s new headquarters building GBC with 105 floors on a 560,443-square-meter space. The building will also host a 155,082-square-meter hotel and facility building with 35 floors, 67,768-square-meter concert hall with 9 floors, 68,895-sqaure-meter convention center with 6 floors and 20,006-square-meter exhibition hall with 4 floors, according to the draft. An observatory will be located on 553 meters above the ground as originally planned.

The concert hall with 2,000 seats will become the largest one in Gangnam. The group will also build a sunken square connecting the complex to the underground of Yeongdong Bridge, public open space and public pedestrian passage, the group said in the draft.

An official from the Seoul Metropolitan Government said the group would break grounds as early as the latter half of the year or early next year at the latest, and complete the construction by 2021.

The current tallest skyscraper Lotte World Tower went through hard time receiving permission from the government due to many safety concerns caused by its sheer size. The Seoul city official said that the height of the Hyundai’s building is within an acceptable limit of 600 meters designated by Seoul city’s urban construction committee.