Seoul’s Lotte World Tower to offer the most expensive homes 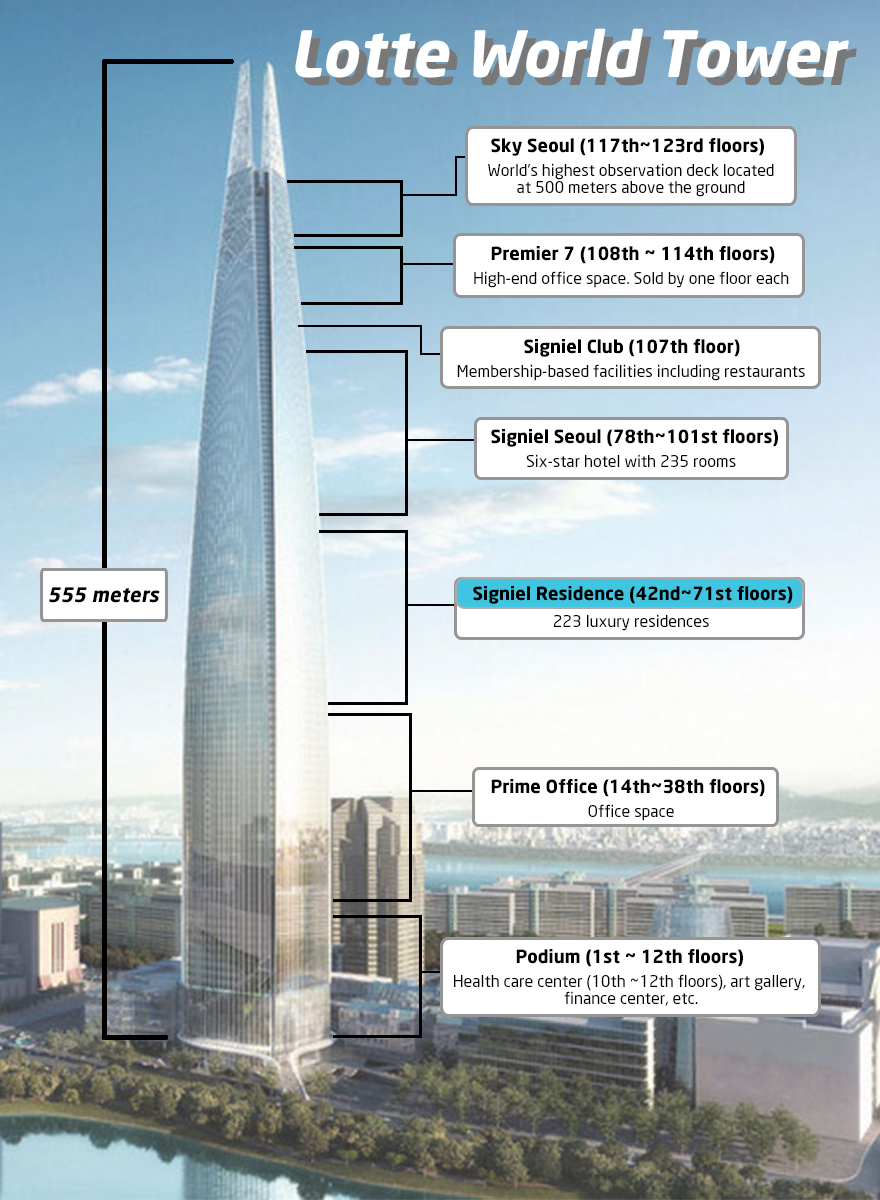 According to information released at the Signiel Residence investors relations event held in Seoul on Tuesday, Lotte World Tower will house a total of 223 luxury residences including a smallest unit with a total floor area of 209 square meters and a biggest unit with a 1,238 square-meter floor area. The Signiel Residence’s two largest units with a floor area of up to 1,238 square meters, each, are designed as a two-story penthouses located on the 70th and 71st floors of Lotte World Tower or the highest floor of the luxurious residential bloc.

An unnamed official of Lotte Engineering & Construction Co., which is leading Signiel Residence’s pre-sales, said the luxury apartments could sell from 5 billion won to 30 billion won. The most expensive unit’s value would double that of Korea’s most expensive residence, Samsung Group Chairman Lee Kun-hee’s single house located in central Seoul that was appraised at 15.6 billion won last year.

The two-story penthouse will be offered with minimum interior design to allow its new owner to decorate the residence based on personal preference, said a Lotte Engineering & Construction official. The penthouse boasts 6-meter high ceiling and a magnificent view over the city of Seoul at 320 meters high above the ground.

Lotte World Tower also allotted floors from 108th to 114th for office uses, naming the section as the Premier 7 on top of the Prime Office zone covering floors from 14th to 38th. The seven floors of the Premier 7 will be sold in a chunk, by at least one floor each, at 120 million won per 3.3 square meters, while the office units at the Prime Office zone will be rented out.

Despite a brewing controversy about Signiel Residence’s expensive offering price, a Signiel Residence salesperson expected its homes would appeal to the rich who are seeking unique and symbolic residences nestled at the tallest building in the country, emphasizing that its future residents can enjoy shopping and entertainment services within one complex in addition to high-end hotel services.

Market experts predict Signiel Residence’s total sales to reach 2 trillion won, an amount that is enough to allow its parent Lotte Group to collect a half of 4 trillion won it has invested in building Lotte World Tower.

Lotte will also pitch against China’s super-rich population to sell its premium residences and office spaces.