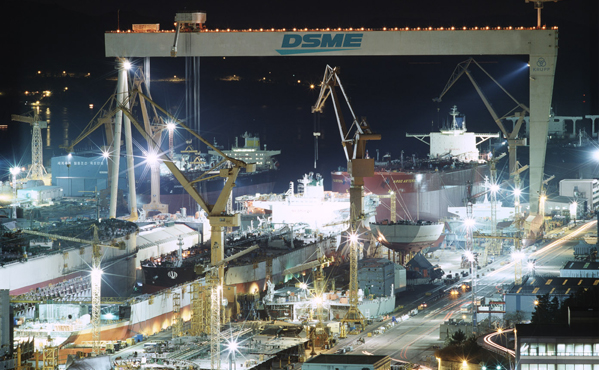 이미지 확대
South Korean government will close down seven of 31 docks run by the nation’s top three shipbuilders and shed their combined workforce by 32 percent from 62,000 to 42,000 to reduce capacity and restore competitiveness of the strategically important industry.

Along with cost-cutting endeavors, the government will provide a subsidy program to sustain work pipeline for local dockyards until global demand improves. It will place orders for more than 250 vessels worth 11 trillion won ($9.6 billion) and pledged a separate 750 billion won for collaborated projects in research and development in the field.

The restructuring outline was announced in a cabinet meeting led by deputy prime minister for economy Yoo Il-ho on Monday.

Hyundai Heavy Industries Co., the largest shipbuilder in the country, would be asked to close off idle docks and sell non-core businesses such as solar cells and wind power. Samsung Heavy Industries Co. will also sell its non-core assets including a hotel in the southern port of Geoje and implement rights offering worth 1.1 trillion won to bolster capital. DSME will gradually withdraw from the money-losing offshore drilling business and will sell all of its real estate properties except offices of its 11 subsidiaries and shipyards.

Shipbuilders would have to focus on core businesses by reorganizing business portfolio and nurture next growth engine.

Hyundai Heavy seeks to start a new business in repair and maintenance customized services and develop a smart ship system that converges shipbuilding business with ICT and logistics. It also considers entering a range of promising businesses including offshore shipyard modernization, provision of core equipments for offshore plants and LNG bunkering that supplies liquefied natural gas (LNG) to ships.

Samsung Heavy plans to develop eco-friendly merchant vessels and tap into new businesses such as operation and maintenance (O&M) and deep-sea offshore plants.