이미지 확대
South Korean content production houses are bulking up while demand for Korean contents has been elevated after Korean names swept major global awards and dominated audience for online read and watching.

According to the investment bank industry on Monday, CJ Group’s drama studio Studio Dragon signed a contract to acquire Gill Pictures, the drama production company behind popular shows such as Netflix’s Juvenile Justice and one of the nation’s three main broadcasting companies SBS’s One the Woman for 20 ($13.94 million) to 30 billion won.

Naver Webtoon has renamed Sidus Studio X to “Locus” after acquiring Locus, the company that developed the nation’s first virtual influencer “Rozy,” for 23.4 billion won for a 52.19 percent stake at the beginning of the year. 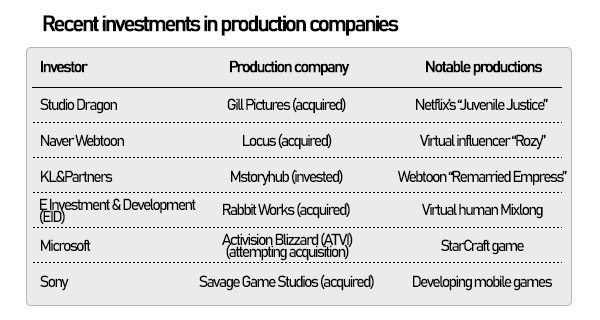 Domestic streaming platforms such as Watcha is tapping SK, KT, and Kyobo Book Center for investment and may sell itself if it cannot draw investment.

“Consumers have grown tired of the overload of streaming services,” said an official from the IB industry. As the streaming platform market is reorganizing itself around select key services, the value of production companies that have strong IP rights is expected to continue rising, added the official.

By Park Chang-young and Susan Lee