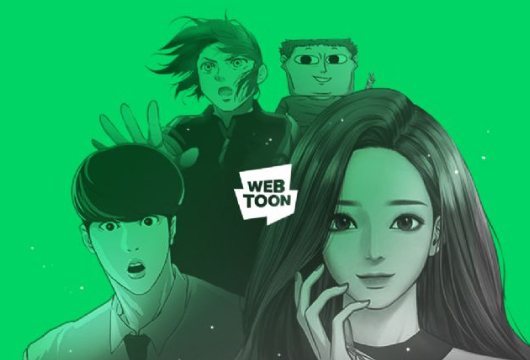 Naver Webtoon’s monthly activity users (MAU) reached 85.6 million worldwide as of June this year thanks to its efforts to increase its MAU and its creators to secure an IP value chain since it was launched in 2004.

The webtoon platform has gained confidence to make profits through paying users (PUs) and average revenue per paying users (ARPPUs) following the cases of YouTube and Spotify. The two global video and music streaming platforms have been transforming their services into paid services after they succeeded in securing enough users with free services in the early stages. The number of YouTube premium users for the paid subscription grew fivefold from 10 million in 2018 to 50 million in 2021, which is still only 2 percent of its total users with room for growth. The number of premium Spotify subscribers has surged from 29 percent of its total users in 2015 to 45 percent in 2021. Currently, about 90 percent of Spotify`s revenue comes from its paid subscriptions.

The securities industry projects that webtoon platforms would achieve a higher ARPPU than even YouTube and Spotify thanks to their partial monetization system for their users that allows users to pay in small amounts to adapt to the system more easily, said Mirae Asset Securities.

Naver Webtoon instituted the industry’s first “Fastpass” system in 2012 where users can read the latest episodes earlier than the official free release date. The global transactions volume for the service surpassed 1 trillion won in 2021 versus around 600 billion won in 2019.

While the number of paying users for Naver Webtoon in Korea currently makes up 26 percent of the total users, globally they make up only 10 percent, meaning that Naver Webtoon still has room to significantly boost its PU and ARPPU.

Japan and the United States are the Korean webtoon giant’s next targets to make profits after the rapid growth in MAU in the countries. 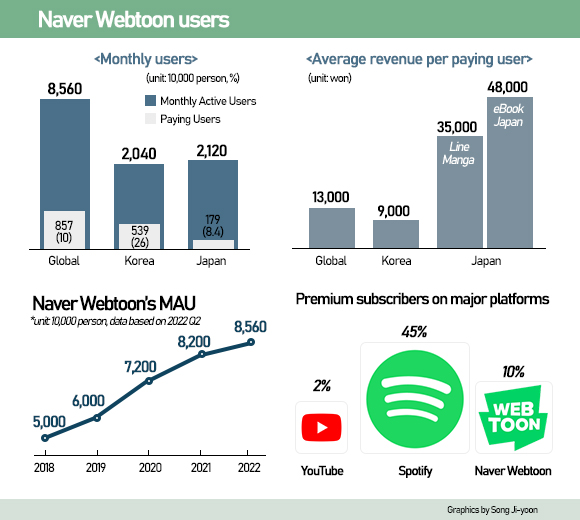 이미지 확대
Naver Webtoon’s MAU in the U.S. stands at 15 million, of which 80 percent are young people aged 24 years old and under. As the purchasing power of this young generation is expected to grow, Naver Webtoon’s PU and ARPPU in the U.S. could also increase, according to market analysts.

In Japan, where its webtoon market has the largest ARPPU in the world, Naver Webtoon’s Line Manga and eBook Japan each achieved 35,000 won ($25.19) and 48,000 won in ARPPU during the second quarter, greatly exceeding its 9,000 won ARPPU in Korea.

Naver Webtoon has also created a task force to expand the businesses of the two companies, and the top five webtoons in August on Line Manga were all Korean webtoons, proving the popularity of K-webtoons.

Webtoons are seen as having a large profit potential due to their format. Webtoons consist of 50-60 panels optimized for digital viewing and scrolling. The first episode is typically free but users have to pay to view other episodes that are released each week. In addition, unlike traditional comics, webtoons are more quickly produced and can be distributed more easily.

Webtoons are regarded as trendy because of their popularity among the younger generation. With the average salary of Webtoon writers reaching 310 million won, talented writers are also expected to continue to join the webtoon force that can contribute to the diversification of content.

While Naver’s content revenue in the second quarter grew, the amount it spent on marketing to expand its webtoons and web novels in the global market weighed on its profitability. If Naver Webtoon can grow its revenue in overseas markets such as North America, it will be able to take advantage of the strong dollar and enhance its profitability.