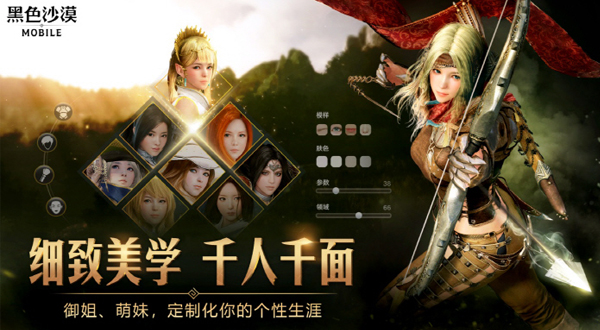 Pearl Abyss officially released its mobile version of its popular Black Desert label in China on Tuesday with commencement of open beta test (OBT), nearly one year after it gained permit from Beijing authorities in June last year in a rare acceptance of a Korean game label in recent years.

"Black Desert Mobile" zoomed to the top of the Chinese app store game charts, becoming the No.1 downloaded game in the country upon release. It also led the charts of Tap Tap, an app market run by Tencent that is jointly marketing the game with iDreamSky. Black Desert Mobile is a mobile version of Black Desert Online, the blockbuster published in 2015 with cumulative downloads of more than 36 million worldwide.

But the fanfare quickly fizzled out, with the rank sliding to 75th later in the day and recovering to 29th Wednesday morning.

The results disappointed investors. The Kosdaq-trading stock ended Wednesday 24 percent down at 74,200 won.

The label had been the first Korean game to roll out in China since 2017 when Beijing abruptly closed the door on Korean games and other products in retaliation against Korea’s deployment of a U.S. Terminal High Altitude Area Defense (THAAD) missile defense system.

The debut had raised expectations for possible releases of more Korean games in the Chinese mobile game market worth about 40 trillion won as of 2021. WeMade is readying to roll out “Legend of Mir 4” in China.

Only three Korean games, including Black Desert Mobile, have received a publishing license from the Chinese government in the past five years, while Beijing issued 96 publishing licenses in 2020 and 74 in 2021 for foreign games. No Korean game made its name on China’s list of new game licenses announced on April 11.

China’s discrimination against Korean games has forced Korean game developers to explore new markets in other countries in North and South Americas, Europe, and Southeast Asia. Nexon launched "Dungeon & Fighter Mobile" in Korea instead of China, while NCSoft folded its plan to make an inroad into China due to a delay in the process of getting publishing license for "Lineage Red Knights" in the country.

By Hwang Soon-min and Jenny Lee