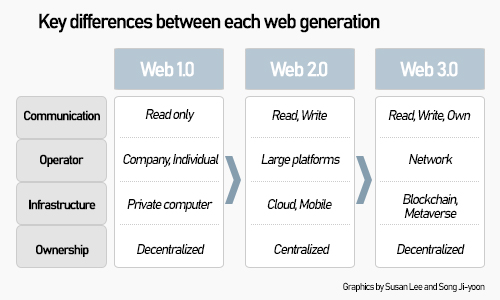 이미지 확대
South Korean game publishers are actively embracing the Web 3.0 era by allowing gamers who contribute to game development to have game ownership and share profits through blockchain and NFT technologies.

According to the game industry on Wednesday, South Korean gaming giant Krafton Inc. established “Web 3.0 Roundtable”, an organization within the company that oversees planning and coordinating Web 3.0 related projects. Krafton is the first Korean game company to set up an organization solely dedicated to Web 3.0. It will also further develop its own metaverse and play-to-earn (P2E) game platform, in which cryptocurrency and NFT can be used to provide gamers with ownership and rights.

Web 3.0 refers to the next disruptive evolution in the web/internet that is expected to come with decentralization, openness and greater user utility.

Krafton is also focusing on the create-to-earn C2E model where game content creators directly create and share games instead of just playing the games created by game developing companies. The ownership of the game in C2E is given not to the platform, but the creator. Krafton is currently developing a creator-based metaverse project with Naver Z Corp., the operator of Naver`s metaverse platform Zepeto. 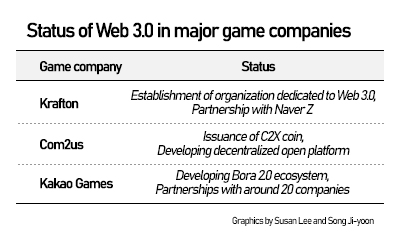 이미지 확대
Krafton’s latest move comes as game ownership in the new digital age is becoming a reality for gamers thanks to the emergence of the blockchain-based Web 3.0 era. In the past, ownership of games and in-game purchases were largely given to game companies.

Other Korean game developers and publishers are expected to follow suit of Krafton.