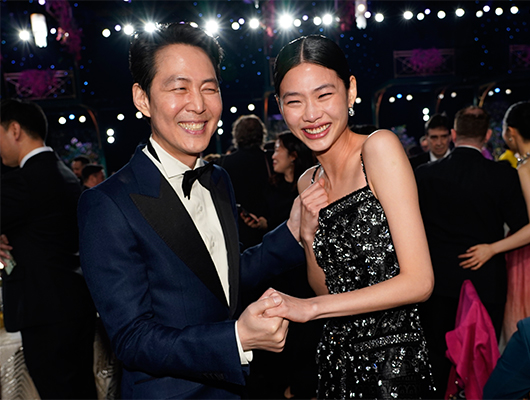 Actor Lee Jung-jae made the breakthrough in top male actor in drama Series and actress Jung Ho-yeon won in the female category at the 28th Annual SAG Awards held Los Angeles on Sunday.

This is not only the first Korean SAG awards, but also the first for non-English series.

Lee Jung-jae for his Player 456 role in Squid Game is also the first actor from Asia to receive individual nominations for best actor across three major award shows – the Critics` Choice Television Awards, the Golden Globe Awards, and the SAG awards.

Jung Ho-yeon bested the likes of Jennifer Anniston, Reese Witherspoon, and Elizabeth Moss to clinch her SAG award for best actress in a TV show.

Squid Game had been the first Korean TV series and the first foreign-language show to be nominated for a SAG Award. It was the most-watched series in the history of Netflix in its four weeks on the streamer.