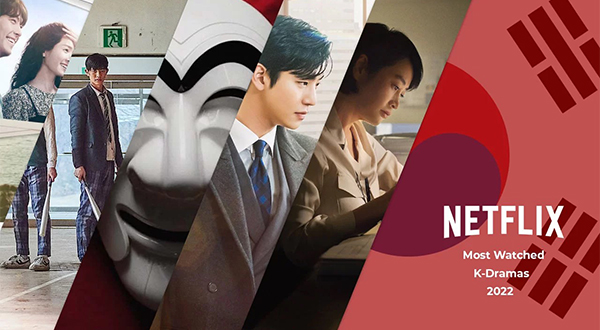 Korean content has been the second most loved OTT programs on global streaming service Netflix platform this year, proving Korean content’s potential to appeal to the broad audience base across the world with diverse themes and stories in series in genres and entertainment shows.

Out of the top 100 TV shows on Netflix this year, 16 programs or the second largest were Korean shows, according to the top TV shows chart compiled by FlixPatrol and analyzed by Maeil Business Newspaper on Thursday. The number itself grew from 10 of last year.

American programs commanded the largest 48. The United Kingdom and Columbia tied for third with nine shows, followed by Spain with seven, Mexico with three, and Germany with two.

The proliferation of Korean content can be shown in subscribers’ behavior. Of all Netflix streaming membership users of 223 million as of the third quarter, 130 million or above 60 percent have watched K-content. The ratio jumps to 80 percent in Southeast Asian countries.

Among the 16 Korean shows, zombie apocalyptic horror thriller ‘All of Us are Dead’ released in January ranked the highest eighth, and ‘Extraordinary Attorney Woo,’ featuring a young lawyer with autism, 10th.

Such a great performance proves Korea’s content production capabilities on the world stage, raising expectations that Korean shows will remain popular next year.

All eyes now are on whether the global interest could expand to Korean entertainment shows as well. This year, reality dating show ‘Single’s Inferno’ was the only entry on the chart at 119th.

By Chung Joo-won and Lee Ha-yeon