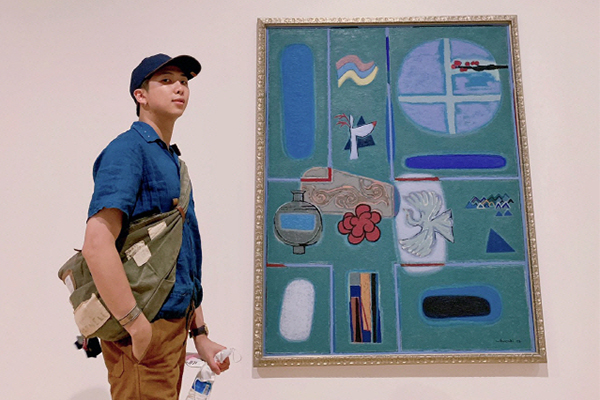 RM, the leader of K-pop sensation BTS, was selected as one of 35 innovators in art by American art news outlet Artnet.com.

Artnet announced the list of 35 innovators who have led the art world, including artists, dealers, and investors, after its first selection in 2020. RM was introduced a musician, collector, and patron.

Complimenting his love for art, the website said, “He’s an avid collector, buying works by Korean artists such as Lee Daewon and Kim Chong Hak as well as KAWS and Takashi Murakami. He’s also a savvy art patron with an enormous reach on social media, inspiring droves of BTS fans to seek out exhibitions ranging from the Museum of Fine Arts, Boston’s Philip Guston show to presentations of traditional Korean white porcelain moon jars in Hong Kong and Korea.”

The leader of BTS has been passionate about art since his debut. He donated 100 million won ($71,590) for the preservation and restoration of Korean artifacts outside of the country. He also recorded an audio guide for a special exhibition titled “The Space Between: The Modern in Korean Art,” which will be held at the Los Angeles County Museum of Art (Lacma) until February next year.

By Kim Seul-gi and Jenny Lee