S. Korea’s odds for top 16 up slightly with draw match against Uruguay 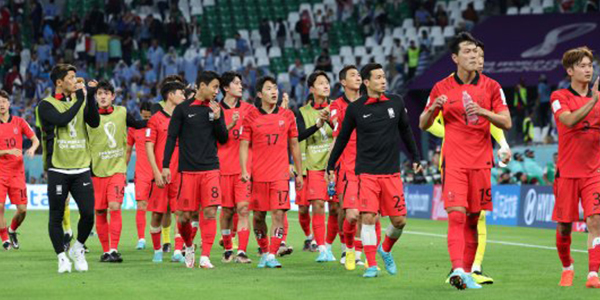 South Korea’s odds of joining Round of 16 in the World Cup 2022 have slightly increased after the country’s national team held South American power Uruguay to a 0-0 draw on Thursday.

South Korea in world ranking of 28th played to a scoreless draw against Uruguay, ranked 14th, in the teams’ first Group H match held at Education City Stadium in Qatar.

According to ESPN’s Soccer Power Index projections, South Korea raised its chance to advance to the knockout round to 39 percent from 36 percent, while Uruguay’s odds fell from 65 percent to 57 percent.

This means South Korea would finish the group match with 1 win, 1 draw and 1 loss, but it would be unable to beat Uruguay due to the goal difference, most likely to be out as third in the group.

Meanwhile, Portugal beat Ghana 3-2, raising the odds of advancing to the top 16 to 88 percent from 81 percent, and Ghana’s winning chances fell to 17 percent from 18 percent.