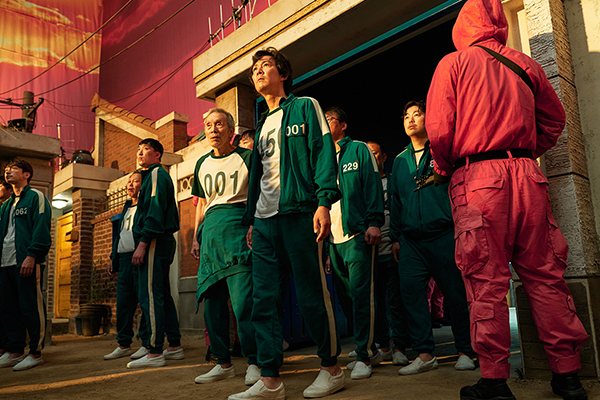 Netflix executives are raving over the global success of its original Korean series "Squid Game" that is the most watched content in 76 countries and to become the streamer’s most successful non-English-language content.

The streamer’s co-CEO Ted Sarandos said Monday (local time) at the 2021 Code Conference, an annual technology conference held in Beverly Hills, California that “Squid Game” could become its most popular show ever. According to Sarandos, the Korean survival drama has already garnered a far larger audience than the French mystery series "Lupin," the first non-English-language show to become the platform’s top program.

The popularity of “Squid Game” gained momentum when the drama which began streaming on Sept.17 set milestone for Korean original series last week to seize the No.1 position on Netflix U.S.

According to the U.S.-based streaming analytics platform FlixPatrol, Netflix`s new Korean survival drama has ascended to the No.1 slot in 76 countries across the Americas, Europe, the Middle East and Southeast Asia as of Sept.27.

Items and costumes from the show have also grabbed attention of global fans and are being sold like hotcakes on eBay. Netflix co-CEO Reed Hastings posted a photo of himself wearing a green tracksuit on Instagram.

Recognizing the growing popularity of Korean content, Netflix has pledged 550 billion won ($463.82 million) worth of investment this year on top of 770 billion won it spent on making Korean titles in the past five years, said Kang Dong-han, Vice President of Korean content at Netflix on Wednesday during Netflix Partner Day.

“The 770 billion won invested over the past five years produced economic impacts worth 5.6 trillion won, creating more than 16,000 jobs in the country in various industries. The investment also generated a wider ripple impact worth about 2.7 trillion won in related industries like fashion and food,” Kang explained.

Some in the industry point out that the Korean content industry should take the global success of “Squid Game” to establish a system under which Korean producers can take a fairer share of profits the shows make. According to industry sources, the production cost of Netflix original U.S. scripted series “Stranger Things” amounted to $12 million per episode, well above the production cost for the entire episodes of “Squid Game” totaling 20 billion won.

By Kang Young-woon and Lee Soo-min