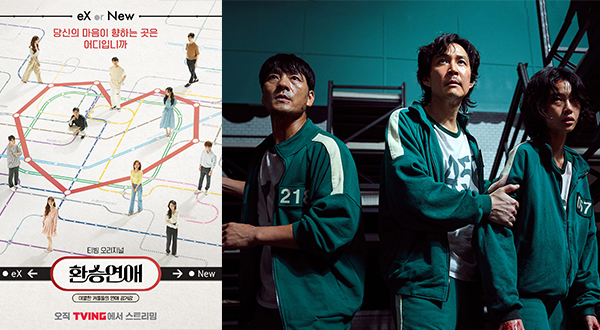 CJ ENM’s over-the-top service Tving has seen a rapid rise in the number of viewers of its original reality show “Transit Love” where several separated couples live in the same house and find new love. The show has become the most popular content of Tving which has been investing heavily in producing original entertainment shows like “New Journey to the West (Shinseoyugi),” “Baek Jong-won’s Four Seasons” and “Girls High School Mystery Class” as well as a film “Seobok” that describes the first human clone that was released both on Tving and theaters.

Video clips of “Transit Love” on YouTube and Naver TV achieved more than 33 million views. An official from the company said the recent success of its original shows proves that OTT platforms can also produce mega-hit content without big-name celebrities. It aims to offer more than 100 original shows by 2023.

The success of Korean shows “D.P.,” a story of a young private’s assignment to pursue military deserters, and “Squid Game,” a nine-episode series of life-or-death survival game, has helped Netflix regain its growth momentum. “D.P.” made top 10 in Japan, Hong Kong, Taiwan, Singapore and Vietnam, and “Squid Game” became the first Korean show to top the U.S. chart. The number of subscribers of Netflix rebounded to 8.63 million in August, after falling to 7.9 million in June from 8.95 million in January.

SK Telecom’s OTT service platform Wavve has also benefitted from successful original shows. The company said its exclusive series “You Raise Me Up” which tells the story of an impotent 30-something man who meets his first love who is the urologist who treats his disease.