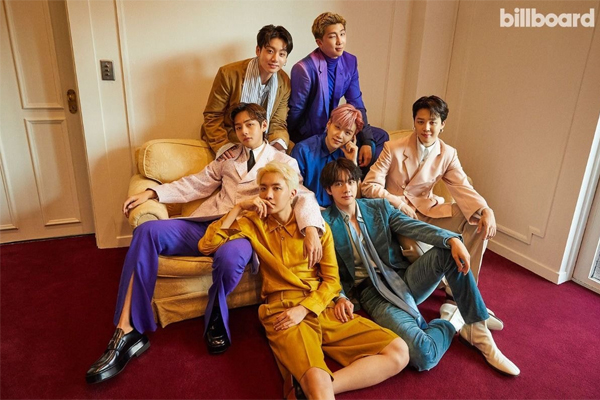 K-pop superstar boy band BTS coolly confronted chart manipulation accusation raised by fans of some competing artists, saying the “fair question” of how to rank a song is up to the chart operator like Billboard and cannot be blamed on fans for their high loyalty.

“It’s a fair question,” said group leader RM in addressing the allegations that ARMY’s work amounts to chart manipulation. “But if there is a conversation inside Billboard about what being No. 1 should represent, then it’s up to them to change the rules and make streaming weigh more on the ranking," he said in an interview Billboard released on Thursday (local time in the U.S.)

After “Butter” and “Permission to Dance” topped the Billboard Hot 100 chart for weeks this year, fans of competing pop stars like Olivia Rodrigo and Dua Lipa, accused BTS fans famously known as ARMY to have organized moves to influence chart performance such as bulk purchasing albums.

Shin Young-Jae, president of Big Hit Music, BTS’s label and a HYBE subsidiary disagreed on the assumption. “I don’t believe the U.S. market is one that can be handily topped by downloads alone.”

Music market’s development can be “head-scratchers” for some people, said Shin.

“We think the songs’ impact was shown in many ways, and we are proud of that achievement,” he added.