Shares of Kakao Games Corp. are running high on the success of the publisher’s first self-made label “Odin: Valhalla Rising” (hereinafter referred to as “Odin”).

The new massively multiplayer online role-playing game (MMORPG) “Odin”, launched on June 29, has been the top-grossing game on Google Play and Apple’s App Store for three consecutive days, beating NCSoft’s Lineage M and Lineage 2M. It garnered more than 4 million pre-orders and became the most popular game app on both of the app markets before the launch. Kakao Games had to add four new servers to cope with the exploding popularity.

The Northern Europe mythology-based title is Kakao Games’ new self-developed intellectual property. The success of the game has proved the company’s capability as a game developer, not just as a game distributor. 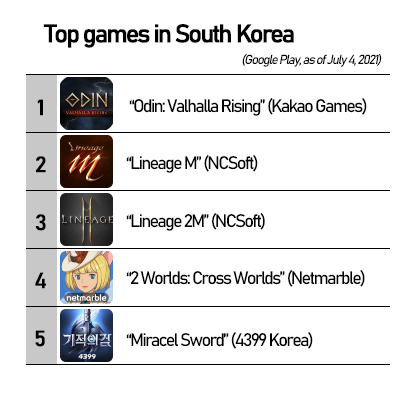 이미지 확대
Kakao Games spent 60.3 billion won ($53.4 million) on commission fees in the first quarter, more than half of its total operating expense of 114.5 billion won. Market experts expect the company would focus more on developing new games with Lion Heart Studio, the creator of “Odin” in which Kakao Games owns a 21.6 percent stake.

“As ‘Odin’ has proved that we could be successful with our own IP, we will continue to work hard to provide stable service,” said Kakao Games.

The successful debut of “Odin” has been raising expectations on upcoming new titles by local game developers. NCSoft’s “Blade & Soul 2” and Pearl Abyss’ “Crimson Desert” are scheduled to debut in the latter half.

The move from the Chinese authority to begin endorsing foreign games after a near four-year ban on games developed by non-Chinese companies is another positive sign for Korean game developers. Pearl Abyss received a license to market its popular MMORPG “Black Desert”’s mobile version in China on June 28, becoming the third Korean label endorsed in the world’s largest game market over recent years. Pearl Abyss saw its share price jump 34.73 percent over the four days after receiving the license.