BTS’ “Butter” goes after previous “Dynamite” record, at No.1 on Billboard Hot 100 for 2nd week 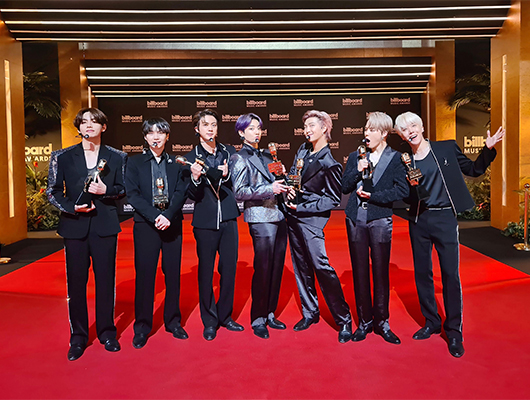 BTS’ “Butter” defended the top at the Billboard Hot 100 for the second consecutive week, raising expectations for a feat that can match its previous English super-hit “Dynamite.”

Billboard said on Monday (local time) that the song “fends off” Olivia Rodrigo’s “Good 4 U,” which ranks No.2 on the Hot 100 to add a second week at No.1.

“Butter” is the K-pop boy band’s second song to debut at No.1 and stay atop for two weeks in a row following last year’s big hit “Dynamite.”

Billboard said “Butter” is the 23rd title to begin at No.1 on the Hot 100 and post a second consecutive week on top, among 54 total No.1 arrivals. 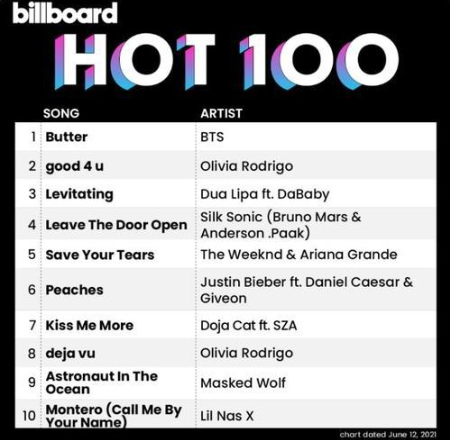 BTS became the first K-pop group that conquered the Hot 100 song chart with its first English-only song “Dynamite” last year that topped the chart three times. Its Korean song “Life goes on” and Jason Derluo’s “Savage love” in which the septet featured in a remix version also hit No.1 on the chart.

The Billboard Hot 100 is a weekly ranking of the most popular songs across all genres based on sales, radio play and online streaming in the U.S. It is one of the two main song charts of Billboard along with Billboard 200.

According to MRC data cited by Billboard, “Butter” drew 19.1 million U.S. streams and recorded 140,200 downloads from May 28 to June 3. They are down by 41 percent and 42 percent, respectively, from last week, but the song attracted 22.4 million radio airplay audience impressions, up 24 percent in the week ending June 6.

The song climbed 7 spots on Radio Songs chart from 39th to 32nd over the past week.

The track maintained its No.1 position on the Digital Songs Sales chart.