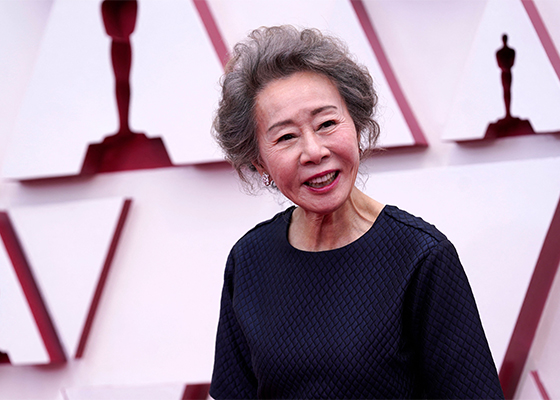 Veteran actress Youn Yuh-jung became the first Korean and second female Asian to receive an Oscar in acting category for her “not-like-a-real-grandma” role in the film “Minari” about Korean immigrants chasing American dream, thrilling her home country for another Oscar night close to home following last year’s feat by “Parasite.”

“As you know, I’m from Korea, and my name is Yuh-jung Youn – most of European people call me Yuh Youn and some call me Yuh-jung,” Youn said in her acceptance speech at the 93rd Academy Awards at Union Station on Sunday. “But tonight, you are all forgiven.”

“I don’t believe in competition, how can I win over Glenn Close?” she said. “Tonight, I have just a little bit luck, I think, maybe. I’m luckier than you. And also maybe it’s American hospitality for the Korean actor. I’m not sure. But anyway, thank you so much.”

It is the first time for a Korean to receive an Oscar for acting. Bong Joon-ho’s “Parasite” won best picture at last year’s event. Youn is also the second female Asian to receive the acting award after Miyoshi Umeki who earned best supporting actress prize in 1957 for her role in “Sayonara.”

Minari is a Korean-American immigrant story written and directed by Lee Isaac Chung. In the film, Youn plays Soon-ja, a tough but wise Korean grandmother who comes to the United States to help her daughter Monica, played by Han Ye-ri, look after her young children.

The film became an instant talk of the town at the 2020 Sundance Film Festival where it received U.S. Dramatic grand jury and audience awards. She received over 30 acting awards for her role in the film. At the Oscars, Minari was nominated for six awards including best picture, director, and original screenplay.