The two companies announced their strategic partnership via video presentation on Thursday morning.

“We are planning to debut a new boy group in partnership with UMG for the global stage,” said Lenzo Yoon, global CEO of Big Hit. “We will select the members by holding a global audition.”

Big Hit and UMG’s Geffen Records will establish a joint venture based in Los Angeles to carry out the project. The audition program will be released next year.

Big Hit will lead the discovery and training of new artists, development of fan content and management of fan communication through Weverse, its fan community platform. UMG will be responsible for music production, global distribution operations and audition program production by leveraging its extensive network. 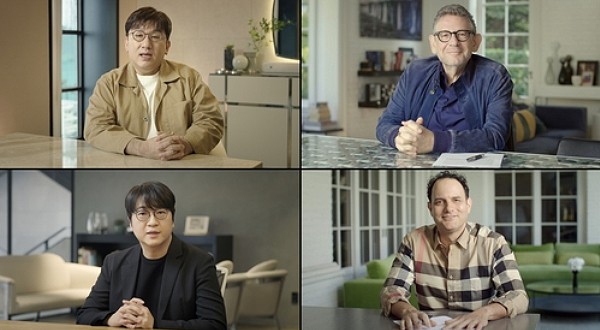 이미지 확대
The new K-pop act will follow the K-pop system, according to Yoon, which means a full production including music, performance, fashion, music video and engagement with fans.

It is the first time for a K-pop label to assemble and debut an artist based on K-pop system through an audition program in the U.S.

This will be the birth of “an unprecedented group,” said Yoon. “The significance of this project as an application of the winning formula that Big Hit Entertainment has established over the past 16 years in the US, the center of the global music market, cannot be overstated.”

UMG CEO Lucian Grainge said its artists will join Weverse to experience new methods of communication with fans. As of now, Gracie Abrams and New Hope Club are actively engaging with their fans through their Weverse communities, and other artists, such as Alexander 23 and Young Blood, will soon be joining the platform, he said.

“We’re thrilled to be working together as we launch a new joint venture between our companies that will further accelerate K-pop as a global cultural phenomenon,” said Grainge.