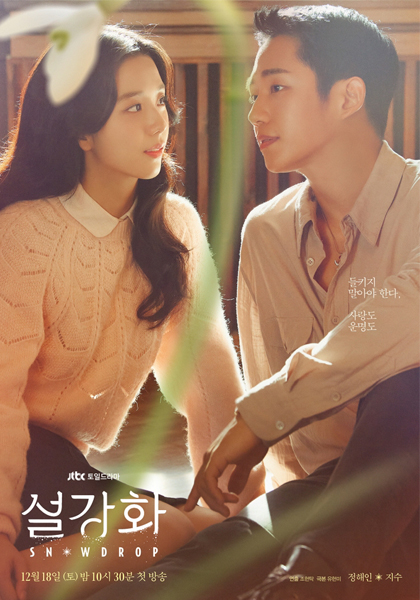 The fate of a new Korean drama “Snowdrop” featuring idol star of K-pop girl group BlackPink and popular actor Jung Hae-in has become murky after its risky mix of South Korea’s democracy legacy with North Korean theme has led to boycott of the series, makers, and sponsors as soon as it was released over the weekend.

Puradak Chicken, local chicken franchise using Jung Hae-in, the main actor of Snowdrop as an advertising model, has become the latest to withdraw its sponsorship for the new TV series broadcast by JTBC.

The show is centered on a love story set in 1987 of a university student played by Jisoo, K-pop girl band BlackPink’s member, and a North Korean spy played by Jung.

The first two episodes of the drama were broadcast last weekend, and it has sparked a strong backlash for allegedly distorting historical facts about the nation’s democratization movement.

In the drama, a female college student (Jisoo) mistakes the male lead (Hae-in) for a pro-democracy activist. Many Korean viewers have found this scene controversial because the dictatorial regime at the time tortured many innocent activists and justified their behavior by calling them North Korean spies.

The show’s use of a song symbolizing college students’ pro-democracy movement has also triggered protest. The song plays at a scene where the male lead, North Korean spy, is chased by a member of the National Intelligence Service.

Amid the growing criticism against the drama, some of the main sponsors including Teazen, Ssarijai and Ganisong have terminated their sponsorship deals.

A petition on the Blue House bulletin board to stop broadcasting Snowdrop has gained over 300,000 signatures as of Tuesday.

Despite the controversy, Snowdrop ranked 12th on Disney+ on Tuesday. It is the first Korean show offered by Disney+ since its launch in Korea.

The controversy has weighed down shares of its production company. Shares of J Contentree, the parent of JTBC Studio, the creator of the drama, have lost around 11 percent over the past four trading days. They closed Tuesday 0.84 percent down at 47,250 won on Tuesday. Shares of YG, the label behind BlackPink, shed 4.8 percent over the last two sessions, but recovered to end Tuesday 1.2 percent higher at 52,200 won.