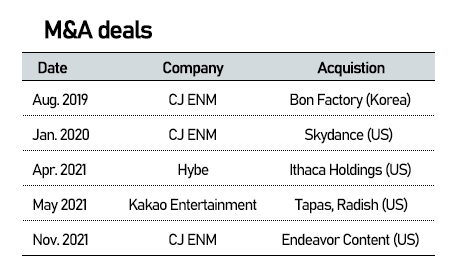 이미지 확대
South Korean entertainment contents producers have become bolder in global foray as they find themselves on equal footing on the international stage due to global raving over Korean original contents.

K-pop producers have found it easier to find overseas partners.

Last year, JYP Entertainment, the label of girl groups TWICE and ITZY, created Japanese girl group NiziU after running a TV audition show jointly with Japan’s Sony Music. Its bigger Korean rival SM Entertainment partnered up with a Chinese firm to set up a talent agency where it is training singers and actors for the Chinese market. CJ ENM is also in search for new idol stars in Japan together with Japanese entertainment conglomerate Yoshimoto Kogyo.

Bulking-up through alliance has been in fashion on the international entertainment scene.

In the U.S., WarnerMedia merged with Discovery and created a new global media powerhouse with an estimated worth of $150 billion in June. WarnerMedia also is preparing to launch a new CNN streaming video service.

The Korean industry has gained confidence to join the trend in line with the popularity of Korean pop culture ranging from music to TV series and films.

For one, Squid Game TV series became a global hit through collaboration with international streaming platform like Netflix, he pointed out.

By Park Dae-ui and Cho Jeehyun