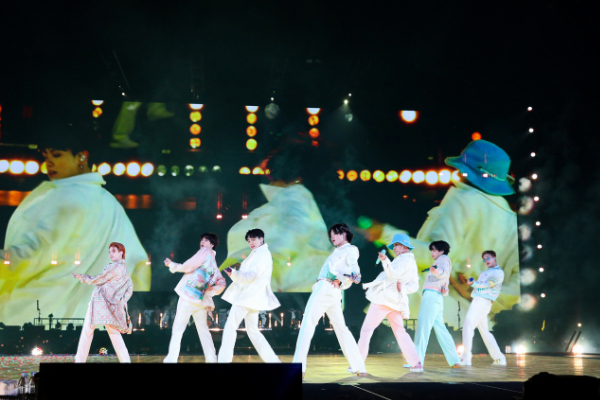 South Korean K-pop superstar BTS has reaped $33.3 million in sale of 214,000 tickets for its first offline stage concerts at SoFi Stadium in Los Angeles, United States since the outbreak of the Covid-19 pandemic, marking the biggest boxscore in global music scene in nearly a decade.

According to U.S. music media brand Billboard on Saturday (local time), BTS’s four concerts in LA grossed $33.3 million from the sale of 214,000 tickets, boasting “the biggest Boxscore total by any act in nearly a decade.”

BTS performed four times at SoFi Stadium in Inglewood, California, on Nov. 27 and 28 and Dec. 1 and 2. The tickets were sold at minimum $75 and maximum $450. There, however, were also black market tickets sold at as high as 18 million won as fans were eager to join the K-pop septet’s first offline performance in two years since the Covid-19 outbreak. 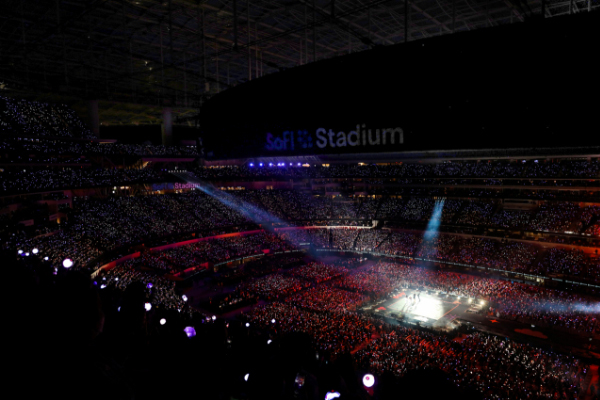 Billboard noted that the BTS concerts were the “largest gross for run of shows at a single venue since 2012, when Roger Waters earned $38 million over nine shows at Estadio River Plate in Buenos Aires, Argentina.”

BTS has also joined the $30 million-plus club members that include six others U2, Grateful Dead, Take That, Springsteen, Roger Waters, and the Spice Girls.

Billboard praised the latest achievement by BTS that primarily performed in Korean notable. Only songs performed in English were “Dynamite,” “Butter,” and “Universe” at SoFi Stadium.

Shares of Hybe, the label behind BTS, nevertheless, fell 5 percent to 338,000 won by midday Monday.