Seoul may be the next stage BTS performs live after LA 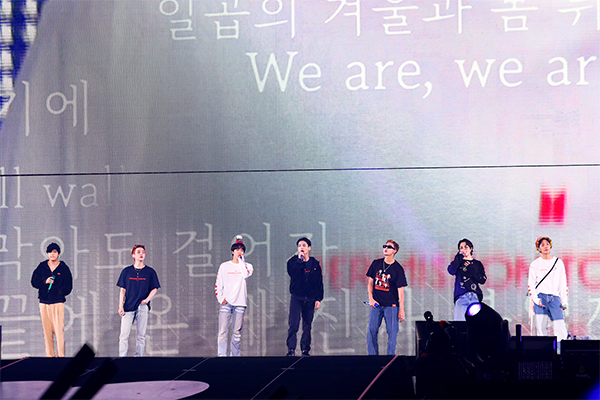 Seoul may be the next live stage BTS may go on after the entirely sold-out show in Los Angeles, according to the K-pop sensation.

Although the K-pop super-group did not specify plans after the L.A. concert, it hopes to meet home fans next year in Seoul.

The members in a press conference at SoFi Stadium in Los Angeles on Sunday (local time) admitted their disappointment for failing to break the Grammy ceiling.

The group has been nominated for just the best pop duo/group performance in 2022 Grammy awards despite multiple tops on Billboard Hot 100 chart.

“As artists [who] started out in Korea, the limitations of our identity, language, genre, invisible walls, we felt like they really existed. But every moment, we tried to give our best to every show, every performance, [all] the music, all of our hearts, and I think those small moments truly made today’s miracle for us. Going back on tour, seeing all the fans really makes us feel like this really is the beginning of our new chapter,” said RM.

The members found the Permission to Dance concert as a chance to show "how much we’ve grown, how much we’ve learned these past 2 years."

The group "felt powerless" and "depressed," Jimin joined RM. Having returned to the stage to meet with fans again, the group feel like they have come back to where they should be, he stressed.

The group performed 26 songs on the first concert day, starting with ON, the title track from “Map of the Soul: 7" album released in February last year.

BTS won the Artist of the Year at the 2021 American Music Awards, on Nov. 21, becoming the first Asian act in history to win the top honor. The boyband brought home additional two awards - Favorite Pop Duo or Group and Favorite Pop Song for “Butter.”

By Kim Hyo-hye and Cho Jeehyun