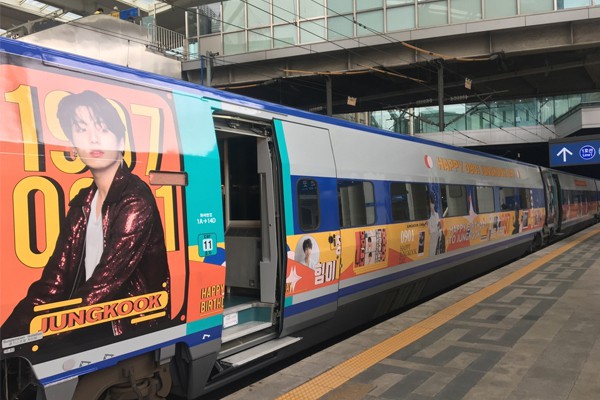 BTS member Jungkook received a separate spotlight on Tuesday with his images adorning a 388-meter-long Korean express train in a lavish birthday gift from his Chinese fans.

Photos of Jungkook and phrases like Happy Birthday and other messages for the 23-year-old member have wrapped the entire 20-compartment passenger train running from Seoul to Busan, according to Korea Train Express (KTX), operator of the country’s high-speed train.

It is the first time that KTX has allowed a wrapping advertisement since a local mobile carrier ran such an ad in 2004.

KTX said its subsidiary Korail Retail received a request from BTS’s Chinese fan club last month to roll out the ad in time for Jungkook’s birthday on Sept. 1. The advertisement, which would run through Oct. 4, is said to have cost about 80 million won ($67,430), which include installation and removal fees. 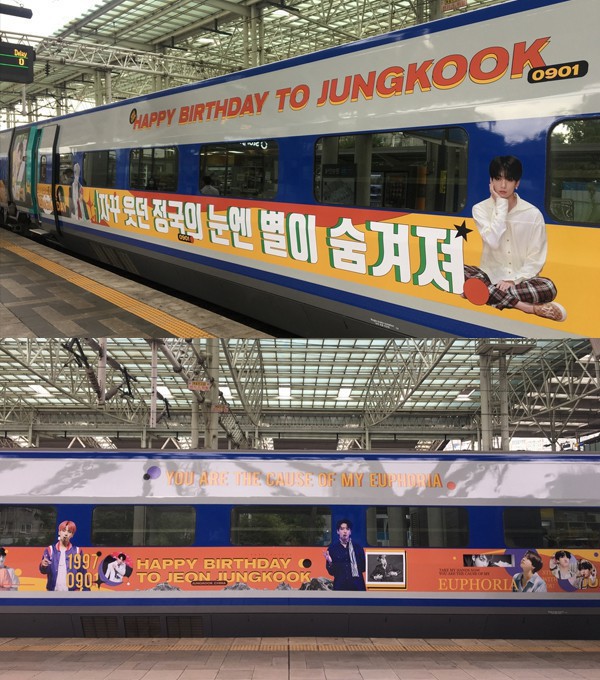 On the day of Jungkook’s birthday on Tuesday, the seven-member boyband made headlines by becoming the first Korean artist to top Billboard`s main singles chart with their latest single "Dynamite."

KTX said it decided to run the ad to raise the global stature of K-pop and generate new revenue sources. As a state-run company, it has mainly reserved such wrapping ads for international festivals held in Korea or tourist sites of provincial regions.

A Korail official said the ad proceeds would also help make up for lost sales from the ongoing pandemic. Traffic up to May dropped 40-50 percent from year-ago levels following the outbreak, but recovered to 60 percent in June and July as virus counts decreased and people started going on summer vacations. But this has now plummeted to 30 percent with the latest resurgence.