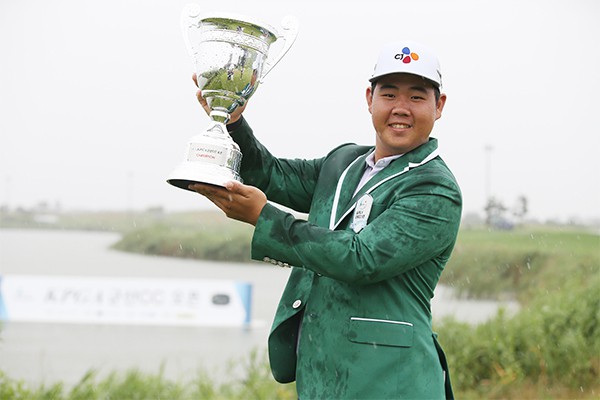 A super rookie may be on the rise from South Korea, a golf powerhouse owed largely to female achievements. But the fast ascension of Kim Joo-hyung, 18-year-old pro golfer, raises hopes for an impressive name in the male category.

Kim on Sunday hoisted up his first trophy after finishing the last round of the KPGA Tour, becoming the youngest golfer to win the men’s tour in Korea.

Kim shot two under par, 69, making two birdies and one bogey to win two shots ahead in the field at the KPGA Gunsan CC Open at Gunsan Country Club on Sunday. The victory made him the youngest golfer to win the tournament at 18 years and 21 days old, beating the previous record of Lee Sang-hee who had won the NH Nonghyup Championship at the age of 19 years, six months and 10 days in 2011.

He lost in overtime at his debut and opening game, Busan Gyeongnam Open a week ago, but didn’t miss the second chance and got the win on Sunday.

Born in Seoul, Kim played golf for the first time at six in Australia with his father, a golf coach. He decided to become a pro golfer at 11 when he saw Tiger Woods playing, he said. He went around the world, playing golf in various countries in Australia, China, the Philippines and Thailand. He swept wins at multiple amateur competitions in the Philippines and picked up wins at the two biggest championships in the country in 2017. As Thailand’s Singha Group pledged a sponsorship after the wins, he moved to Thailand.

He made his professional debut in June 2018 at the age of 16 at the Asian Development Tour (ADT), the second-tier tour operated by the Asian Tour. He won the Panasonic Open India in 2019, becoming the second youngest golfer to win the title at the Asian Tours.

He played in various golf courses with different conditions and he didn’t even have his own set of customized golf clubs as recently as last year. He was not born in a well-to-do family, so he had to work really hard to receive sponsorships and reach this level. He could have his own custom clubs for the first time after he signed a sponsorship with Titleist in December 2019.

Now at the 113th in the world rankings, he said his goal is to play on the PGA Tour in the U.S. and grab the No.1 ranking in the world. His role models are Woods and Korean golfer Im Sung-jae.

By Cho Hyo-sung and Choi Mira