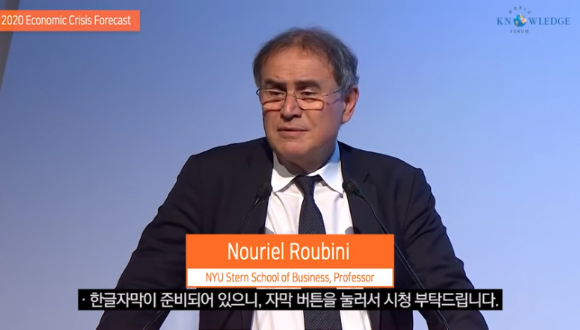 이미지 확대
World Knowledge Forum (WKF) has uploaded more than 300 videos on its official YouTube channel, opening up some of its most insightful talks from world-renowned speakers.

Launched in 2000, WKF is Asia’s largest annual business forum hosted by South Korea’s Maeil Business Newspaper. It has been regularly uploading videos of its previous conferences, with sessions by prominent speakers now making up 200 of its 300 videos.

One video that has been gaining traction amid the COVID-19 pandemic is a talk titled “2020 Economic Crisis Forecast” presented by Nouriel Roubini, professor of economics at New York University, at last year’s conference. The video hit 41,000 views as of Monday, with the view count surging 20,000 over the past two months.

The most-watched video is the opening session of the 20th WKF held in 2019, with 160,000 views. The session was pack full of inspiring talks from some of the biggest up-and-coming entrepreneurs in the world, including Hadi Partovi, chief executive of Code.org, a U.S. non-profit to promote computing programming education; Niklas Östberg, co-founder and CEO of the online food delivery giant Delivery Hero; and Vitalik Buterin, co-founder of the blockchain platform Ethereum. Another highlight of the event was a special talk between YouTube co-founder Steve Chen and the 73-year-old Korean YouTube influencer Park Mak-rye.

The second-most watched video is a 2018 talk by Seo Jung-jin, chief executive of the Korean biopharma giant Celltrion. It topped 110,000 views, making it the most popular video for an individual session.

By Yoon Won-sup and Kim Hyo-jin