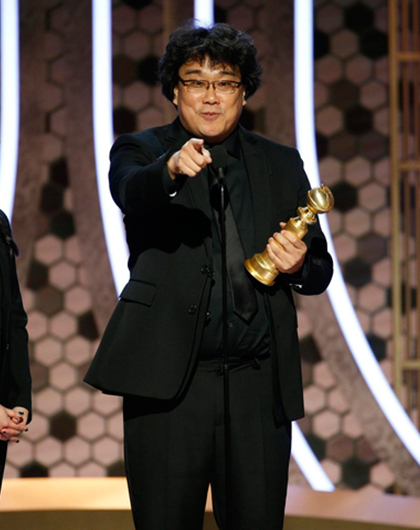 Bong Joon-ho’s black family satire “Parasite” was crowned the best foreign film at the 2020 Golden Globes on Sunday, opening a new chapter in South Korean film history and lifting its award prospects in the run-up to the Oscars ceremony next month.

The thrilling parable of haves and have-nots, which has been on a fierce winning streak since taking home the Palme d’Or at the Cannes Film Festival last May, became the first Korean film ever to score a Golden Globe win.

"Once you overcome the one-inch tall barrier of subtitles, you will be introduced to so many more amazing films," said Bong, who delivered his acceptance speech through a translator.

"Just being nominated along with fellow amazing international filmmakers was a huge honor," he said, adding "I think we use only one language: the cinema." 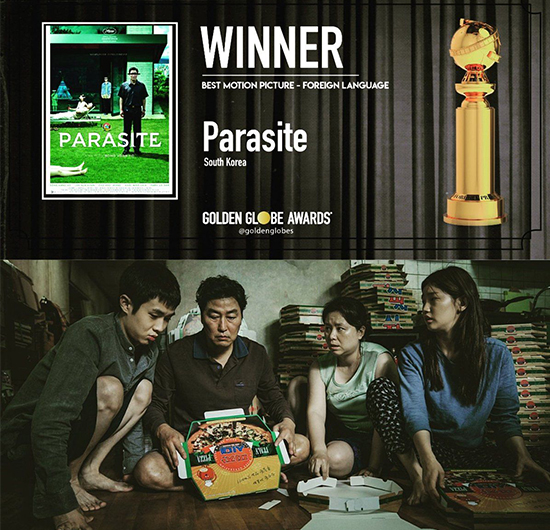 이미지 확대
The runaway box office hit had also earned directing and screenwriting nominations, a rare feat for a non-English title, but failed to grab further wins. Sam Mendes won best director for his World War I movie “1917.” The best screenplay went to Quentin Tarantino’s “Once Upon a Time in Hollywood.”

Parasite has grossed over $23.9 million in the U.S. and $129 million worldwide, making it the highest-grossing foreign language film of the year.

The movie is also a strong contender in the Oscar’s best international film race and is being hailed as potentially the first foreign language film to win best picture. The 92nd Oscars will be held on Feb. 9.