Oscar winner Parasite out to make fortune after achieving fame 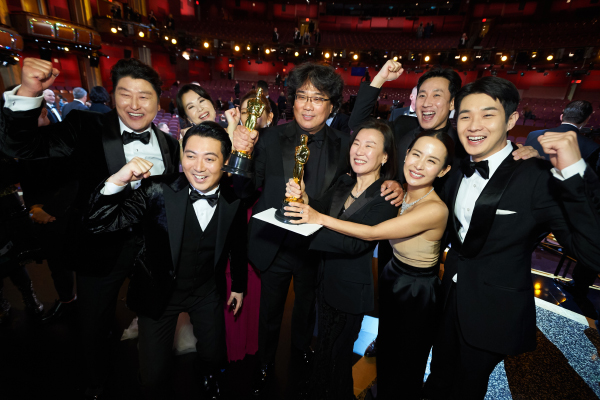 이미지 확대
Having reached the peak in global fame through sweeping wins at the Academy Awards, Parasite is now out to make history for Korean and non-English motion pictures in fortune-making.

It is poised to join the top five foreign language films of all-time at the box office in North America as its regional distributor Neon has been bumping up screens to more than 2,000 theaters this week after its historic Oscar wins.

Parasite was first released in the region in just three theaters in October last year. It has now been expanding to a wider opening of as much as 2,000 after it amassed four awards at the Academy Awards on Sunday (local time) including the top honor best picture on top of best original screen play, best international film, and best director. 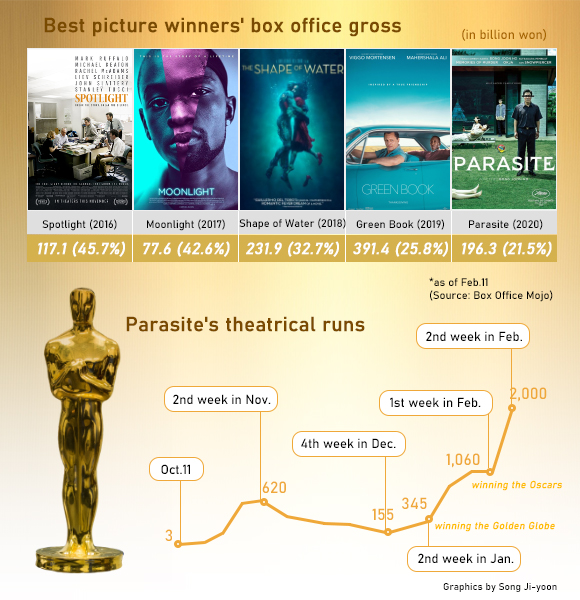 이미지 확대
The film has grossed $35.53 in North America as of Feb. 9, ranking sixth highest-grossing film in non-English language and keeping narrowing the gap with Pan’s Labyrinth in the No.5 spot with $37.6 million, according to ticket sales tracker Mojo.

On Monday, its box-office rank zoomed up to fourth from 12th following the Oscar night.

The entertainment industry expects Parasite to surpass others in the rank including No.2 Life Is Beautiful at $57.2 million, although it may be hard to take over the top spot held by Crouching Tiger, Hidden Dragon at $128.1 million.

Other media outlets expect the film could enjoy a post-Oscar bump, just as last year’s best picture winner Green Book did by adding $4.7 million sales in the first week after its victory.

Bong Joon-ho’s thriller is also expected to expand theater count in other territories. It’s been just a week for the movie to open in Britain, the world’s fifth largest film market, and has not yet been released in 150 or more nations that bought its screen rights. Some market watchers suggest the movie could even reach $500 million in gross globally, a feat never achieved by subtitled releases excluding The Passion of Christ.