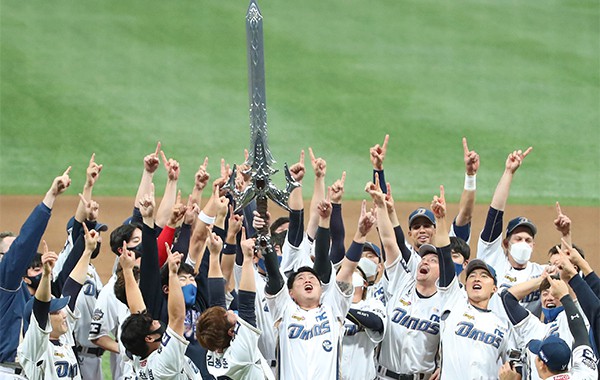 The KBO champion NC Dinos captain and catcher Yang Eui-ji hoists the "Execution Sword," a replica of the most powerful item of NCSoft`s mega hit game Lineage. The Dinos is owned by NCSoft. [Photo by Yonhap]

The victory came after it achieved its first-ever KBO regular season championship last month with 83 wins, six ties and 55 losses.

The Dinos captain and catcher Yang Eui-ji, who had run for the Bears until 2018, won the Korean Series MVP by receiving 36 votes out of 80 from the media. After finishing the 2018 season last in the KBO in 2018, the Dinos in the following year signed Yang as a free agent by lavishing 12.5 billion won ($11.3 million), the second-highest in the history of the KBO FA, to rise again.

The South Korean game developer NCSoft’s baseball team celebrated the priceless victory with an artifact of “Execution Sword,” the most powerful item of the company’s mega hit and longest-running game “Lineage” in a show of appreciation to their avid patron.

NCSoft CEO Kim Taek-jin, who attended every Korean Series Game with more than 100 company workers to cheer for the team, delivered the sword, and captain Yang held it up high in triumph.

The club’s victory has realized Kim’s childhood dream. He visited the stadium not only in Seoul but also in its team base Changwon whenever time is available. After the team’s regular season championship was confirmed in October this year, he came down to the ground of NC Changwon Park to thank the players for helping him achieve one of his dreams.

NC Dinos also caught on with fans in the United States earlier this year, when ESPN broadcast KBO games as the country’s Major League Baseball was sidelined under the Covid-19 shutdown. North Carolina, that lacks MLB team and shares the same initials with the team, said it is rooting for the Dinos. North Carolina’s minor league Durham Bulls tweeted after last night’s victory congratulating the team.

By Lee Yong-gun and Choi Mira